Posted on 2012 February 5 by Marc Carlson 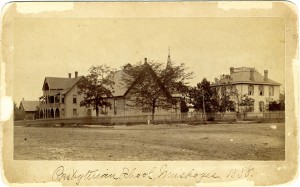 As we are digitizing images from the University’s Archives, which can be seen on our ContentDM service McFarlin Library, Department of Special Collections, Digital Collections, we are rediscovering interesting material about the early history of The University of Tulsa, and its origins as Henry Kendall College. We shall be sharing that in this blog every few weeks.

The context surrounding the origin of what would become The University of Tulsa is somewhat convoluted, resulting from a split in the national Presbyterian organizations. Ostensibly resolved in the 1870s, this split was still present enough that the Presbyterian Church was a little slow off the mark in formally establishing a school for the Native Americans and Whites in Muscogee (as it was called when it was founded in 1874). Although the Presbyterians built the first church in Muscogee, and actually had the first school, which opened in 1876, the Baptists and the Methodists were faster with recognizing their schools. The Baptists established the Harrell International Institute (later the Spaulding Institute) in 1882, and the Methodists founded Indian University (later Bacone College) in 1885. The first Presbyterian school was not recognized by the Creek Nation, nor was it supported by the Board of Home Missions (led at that time by Henry Kendall). It was simply run by the local Minister, Rev. John Elliott, with W. L. Squire, the postmaster, acting as instructor as well as an elder of the church.  Muscogee was at this time the principle town in Indian Territory, and would remain so until statehood.

In 1880, Elliot was replaced by Rev. Samuel A. Stoddard, who, along with Rev. Timothy Hill, lobbied with the Executive Board of Home Missions for the establishment of a Girls Mission School in Muscogee. This school, recognized by the Home Missions, but growing out of the earlier Church School, opened in September 1882. The first classes were still held in the church building, led by Rose Steed, the sole instructor. The Stoddards left in 1882, and were replaced by Rev. Thomas A. Sanson and his wife, Serephina P. Sanson. A Miss Fulton replaced Rose Steed as instructor. Construction began in 1883 on Stoddard Hall, to make the school a true boarding school. Even so, there were some difficulties, some financial and some personal, between the Sansons and the local elders. The Sansons left in 1885, with the collapse of Mrs. Sanson’s health. Muscogee was left without a Presbyterian Minister, although Rev. A. Grant Evans from Park Hill mission would come over when needed.

The Home Board assigned Miss Alice M. Robertson to head the school beginning in the fall of 1885. This placement of a non-minister over the school was the first step in a long process of separating the school from the church. Under Alice Robertson, the school stabilized and began to grow. That first year, the staff consisted of Alice Robertson, Miss Agnes A. McCormick and Miss Adaline L. Willey. Miss Carlotta Archer soon joined them as a music teacher. In 1887, Minerva Home was built to house the growing student population. The school continued to grow. In 1888, Alice Robertson’s sister Grace joined the staff. Their mother, Ann Eliza Worcester Robertson, joined as a Creek translator. Other staff followed.

In 1892, Rev. William Robert King, then head of the Synod of Indian Territory for the Presbyterian Church, proposed closing the Presbyterian mission schools in Indian Territory, and using those funds to establish a formal college for both Indians and Whites. He also proposed a name for the new school, Henry Kendall College. The Mission School for Indian Girls closed its doors at the end of the Spring semester, 1894. Henry Kendall College opened in the fall.