This, the second installment on the history of the university, examines the history from the establishment of the school to the move to Tulsa. The first entry can be found here. 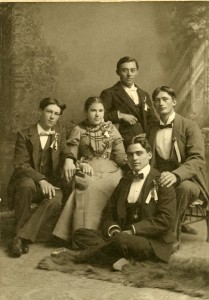 Henry Kendall College opened its doors on September 12, 1894, for its first ever freshman class. These new students consisted of Benjamin Franklin McCurtain, son of Greenwood “Green” McCurtain, Principle Chief of the Choctaw Nation and Lucile “Lulu” Walrond. Joining them were the Senior, Middle, and Junior Preparatory classes, which were what would be today considered a High School. The music department was somewhat separate, but the students were considered part of Henry Kendall College, as were the Kindergarten and Primary Day School students. Classes were divided into Classical and Scientific tracks. Tuition at the collegiate level was $2.50 per month, and for residential students, tuition, board, light, fuel, and washing was $12.50 per month (or $112.50 per year).

The earliest “plant” for the school remained at the location of the Presbyterian Mission School at 2nd and Okmulgee in downtown Muskogee, consisting of the administration building, Minerva House (or home) for girls, the Presbyterian Church building, and Stoddard Hall to house boy students. It became soon apparent that these facilities would be inadequate for the planned College. 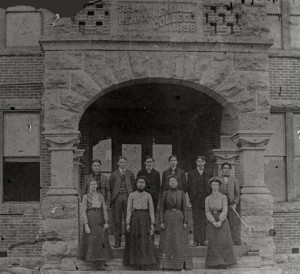 The school moved along slowly, hampered by the impression that it was an Indian college, and because of political issues within the Presbyterian church.

Football came to Kendall in 1895, establishing a long athletic tradition. 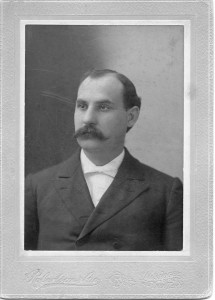 In 1896, Caldwell left and was replaced as president by William R. King, who had been so instrumental in establishing the college, being counted as its founder. There were a number of issues facing him, not the least of which was that while Muskogee had grown to be one of the largest cities in Indian Territory, second only to Ardmore, it wasn’t large enough to support a large number of academic institutions. In 1895-1900, it supported five: Kendall (Presbyterian), Indian University/Bacone (Baptist), Nazareth Institute (Catholic), Harrell/Spaulding Institute (Methodist), and Edwards Baptist College (African American).

By the end of the academic year in 1897, it was clear that the original campus was inadequate and President King made plans to move the entire university to a new location with purpose-built buildings and plans to expand.

Pleasant Porter, a prominent Creek and Clarence W. Turner, a local civic leader and businessman made arrangements for the college to acquire land about a mile west of town. 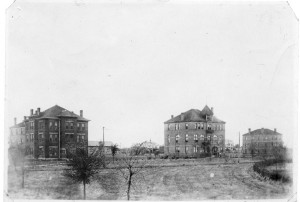 On June 1, 1898, the first senior class graduated: Lucile Walrond, Ben McCurtain, and Joseph Norman Leard. Lucile Walrond was the valedictorian, and probably the first graduate. They were also the first baccalaureates granted by higher educational institutes that still exist in Oklahoma.

Students Milo Hendrix and Eugene Gilmore had volunteered in the spring of 1898 as Rough Riders and had gone to Cuba in the Spanish-American War. Eventually eight other students would also enlist. Hendrix was killed in the Battle of San Juan Hill, and was the first Kendall student killed in battle.

On September 5th, 1898, Henry Kendall College opened at the new location. That autumn Kendall played football against the University of Arkansas for the first time, and apparently won. In 1899, Kendall lost to Arkansas.

In 1899, A. Grant Evans became the new president of the college when King had to resign due to ill health.

In the early part of the 20th century, the college continued to struggle with its identity, whether it was to be a solely religious organization, and whether it was an Indian School or not. These were questions that echoed as the Twin Territories moved toward statehood.

President Evans was present at both the Sequoyah and Oklahoma Statehood conventions along with Kendall graduate Gabe Parker. Parker and Evans designed the proposed state seal for Sequoyah, and when it became obvious that the territories were to be joined, redesigned the seal for the new state.

Unfortunately for the school, this time was a difficult one, and money was becoming an issue. While the Presbyterian board of missions paid part of the school’s costs, and more was paid by fees and tuition, the school had very little revenue. The only real endowment was a $500 gift that had been given in 1905 by Mary Baird Bryan, wife of William Jennings Bryan. By 1906, the Mission Board was investigating plans to rid itself of the financial burden of the college. By 1907, they had transferred that burden to the Synod of Oklahoma. The Synod began to look for alternate locations for Kendall.

In May of 1907, the Tulsa Commercial Club went to the Synod and made arrangements for the school to be moved to Tulsa.

During these negotiations, enrollment in Muskogee had dropped, and on June 4, 1907, the final class from the Muskogee Kendall College graduated.

The community in Muskogee and the Native population were very unhappy as the school moved to Tulsa that summer.