Release of Woody Guthrie’s Only Novel, House of Earth

Posted on 2013 February 5 by Carlos Acosta 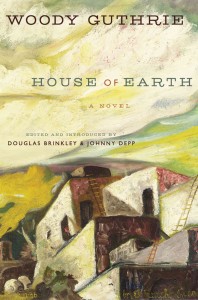 The literary world is celebrating the recent publication of acclaimed singer-songwriter Woody Guthrie’s posthumous novel, House of Earth, Guthrie’s sole foray into prose. The novel, published from a manuscript housed in McFarlin Library’s Special Collections, was edited and published by historian and author Douglas Brinkley and actor Johnny Depp. House of Earth is a semi-autobiographical novel, describing the lives of a young couple attempting to survive the Dust Bowl in an adobe house.  Guthrie finished the novel in 1947, and while it was never published, he did try to get it made into a film by Irving Lerner.  It is probable that the University acquired the text from Lerner’s estate sometime between 1976, when the filmmaker died, and 1984 when a copy of the manuscript was made for Harold Leventhal, Guthrie’s agent and manager.  This copy is likely what formed the basis of the upcoming publication.

Guthrie, better known for his profound impact in the folk music scene and whose artistic influence permeates the works of singers and songwriters such as Bob Dylan, Bruce Springsteen , John Mellencamp and, of course, his son Arlo Guthrie, wrote House of Earth as a reflection on his experiences in late-1930’s Dust Bowl America. The novel follows two farmers in tune with their land, Tike and Ella May Hamlin, espousing the benefits of adobe houses against the brutal West Texas weather to great resistance from the lumber companies in town, establishing the novel as both a slice-of-life narrative of Dust Bowl United States and a political allegory of Guthrie’s views. Brinkley’s and Depp’s mission to publish Gurthrie’s only novel led them to our very own McFarlin Library’s Special Collections in order to begin the process of editing the work for its eventual publication and distribution.

House of Earth was written during a period in which virulent anti-Communist rhetoric was rampant in the United States. Guthrie’s notions that the ownership of land was established by mere occupation, and that financial institutions were stealing from the poor through their lending practices, resonate loudly throughout the novel. In an NPR interview, Douglas Brinkley claimed that Guthrie “was outraged at what bankers were doing, and when people were struggling and they couldn’t pay rents and were being forced off the land. And so [Guthrie’s major hit] ‘This Land Is Your Land’ and House of Earth are both aimed at people being able to say if you grew up on a property it should be yours, and you should be able to live on it.” Combined with the novel’s explicit sexual content, Guthrie’s socialist/populist ideals rendered the novel virtually unpublishable and unmarketable in the face of McCarthyism’s imminent arrival.

This novel is a powerful tale of America that paints a vivid portrait of a time that forever changed the course of American history. The University of Tulsa and the staff of the Special Collections Department at McFarlin Library are proud of their contribution to the publication of such a profoundly important work of literature. This reiterates our commitment to academia and our mission to be the most effective and efficient research tool we can be for our users which include students, faculty, the local community, and scholars from around the world.

This entry was posted in Collections, News and tagged guthrie, house of earth, Woody Guthrie. Bookmark the permalink.