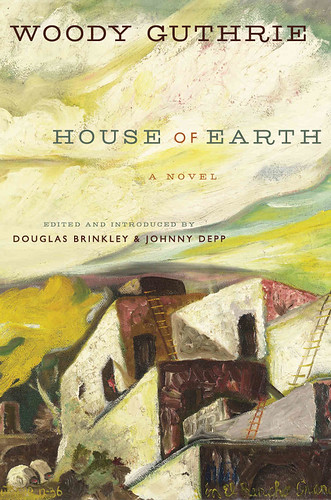 House of Earth was published from a manuscript housed in McFarlin Library’s Special Collections, and was edited and published by historian and author Douglas Brinkley and actor Johnny Depp. House of Earth is a semi-autobiographical novel, describing the lives of a young couple attempting to survive the Dust Bowl in an adobe house. Guthrie finished the novel in 1947, and while it was never published, he did try to get it made into a film, directed by Irving Lerner.  It is probable that the University of Tulsa acquired the text from Lerner’s estate sometime between 1976, when the filmmaker died, and 1984 when Special Collections made a copy of the manuscript was made for Harold Leventhal, Guthrie’s agent and manager.  This copy is likely what formed the basis for the published novel.

Guthrie, better known for his profound impact in the folk music scene and whose artistic influence permeates the works of singers and songwriters such as Bob Dylan, Bruce Springsteen, John Mellencamp and, of course, his son Arlo Guthrie, wrote House of Earth as a reflection on his experiences in late-1930’s Dust Bowl America. The novel follows two farmers in tune with their land, Tike and Ella May Hamlin, espousing the benefits of adobe houses against the brutal West Texas weather to great resistance from the lumber companies in town, establishing the novel as both a slice-of-life narrative of Dust Bowl United States and a political allegory of Guthrie’s views. Brinkley’s and Depp’s mission to publish Gurthrie’s only novel led them to our very own McFarlin Library’s Special Collections in order to begin the process of editing the work for its eventual publication and distribution.

Along with the novel, the Woody Guthrie Center will also exhibit original artwork created by Woody Guthrie in the late 1940s (featured in the published novel) and the original 1934 government pamphlet on building adobe structures.