The Art of the Book: Challenging Our Concepts

Many of the books and book-like objects to be seen in The Art of the Book, now on exhibit at the Zarrow Center, will challenge our notions of what constitutes a book—that ordinary and universally recognized thing that British author Paul Scott referred to as “a small, hard, rectangular object”.

The Artists’ Book:  Unlike authors and illustrators of the traditional book who may be constrained by the wishes of editors and publishers, the book artist is free to experiment with textual content (or the lack of it) and the combinations of all sorts of media.   The artist may choose to combine texture, color, sculptural qualities, moving parts, pop-ups, imagery (conceptual or non-conceptual), sound, and, in some cases, even smell. In other words, the artists’ book may engage some or all of the viewer’s senses while moving beyond words and intellect to communicate with the viewer.

Some influential 20th century movements in the book arts are (to name only a few):

The Altered Book:  Also on exhibit is a selection of altered books.  Technically, the illuminated manuscript could be considered an early form of the altered book; however,  Tom Phillips, a British artist, is credited with initiating the modern altered book movement when, in 1966, he bought a used and very inexpensive Victorian novel, A Human Document, by W.H. Mallock, and transformed it into his own work, A Humument. 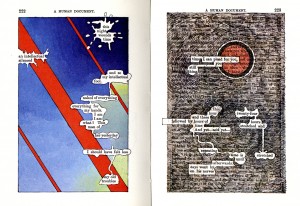 An altered book is created from an existing book (old, new, or recycled), utilizing an almost unlimited range of methods and media—re-binding, dis-binding, reshaping, cuts , tears, folds, assemblage and/or additions of 3D objects, painting, relief printing, collage, pockets and windows, pop-ups, and the use of or marking out of existing text—in order to alter its original form.

The Art of the Book continues through June 28th at the Zarrow Center for Art & Education, downtown in the Tulsa Brady Arts District.