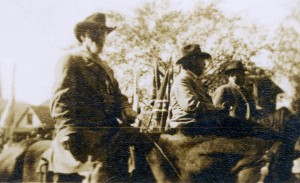 Between 24 and 27 September 1918 the city of Tulsa, Oklahoma hosted a Reunion of the United Confederate Veterans, and other affiliated organizations. This reunion was an important milestone for the city, with the city boosters led by Tate Brady of the Brady Hotel, and the city welcomed the veterans with open arms. Most homes hosted some of the 35,000 veterans, and a number of businesses in town took out large ads in the newspapers welcoming the veterans, and many special events took place, including visits to the oil fields, and a boxing match. The actual reunion took place at the Convention Hall, now the Brady Theater.

This reunion had a special purpose, more so than most of the other reunion the Civil War veterans had held, and would hold over the years, and that was to support the war effort of the nation in the World War. The position reported in the newspapers of the time that the North and South stood by the President in this war, and the veterans took a loyalty oath to that effect during the reunion.

The opening speeches were given by Tate Brady, as the Committee Chairman, the head of the Chamber of Commerce Robert M. McFarlin, Albert Hunt of the Stand Waite Camp of the Sons of Confederate Veterans of Tulsa, and Mrs. Louis Cohen president of the Tulsa Branch of the Daughters of the Confederacy. 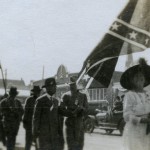 On the last day of the Reunion, a parade of the units first by State and then by Brigade was held, from the Convention Center, down Boulder Avenue to 3rd Street, east to Main Street, south on Main to 8th, where the old soldiers performed a counter-column and back north up Main to 4th, east to Cincinnati, back to 3rd and Main, and up Main to Brady before passing in review at the Convention Center.

An unknown photographer was positioned on the east side of Main between 6th and 7th and he caught 16 images on two rolls of 127 film, probably with a Vest Pocket Kodak. 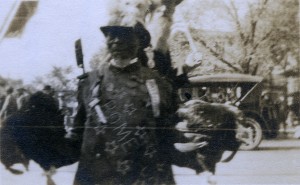 Parade with an unidentified African American Confederate veteran. He has “Rome, GA” blazoned on his chest, and is holding what appear to be two chickens. Confederate Veterans Encampment Photographs, 2015.056.16

An interesting facet of this Reunion was the presence of African American veterans of the Civil War who had enlisted in the Southern Army at the request of General Nathan Bedford Forrest, according to an interview in the 24 September 1918 Tulsa Star. These photographs include three of these veterans, including one who may be “Old Steve” from Rome, Georgia who was described in the 24 September 1918 Tulsa Democrat.

The Department of Special Collections and University Archives just acquired these photographs from Lee Roy Chapman, a local dealer.

The Librarian of Special Collections and University Archives, McFarlin Library, The University of Tulsa since November 2005.He holds a Masters in Library and Information Studies from the University of Oklahoma, and a Bachelor of Arts in History and Anthropology from Oklahoma State University. He has worked in McFarlin Library since 1986.
View all posts by Marc Carlson →
This entry was posted in Acquisitions, History and tagged acquisitions, civil war, Reunions, Tulsa, World War I, World War One, WWI. Bookmark the permalink.