I, Libertine–Fake book and literary hoax

Posted on 2015 October 2 by Jennifer Donner

During a recent staff meeting at McFarlin Library Special Collections and University Archives, the topic of fake books and literary hoaxes came up. The one fake book that grabbed everyone’s attention was “I, Libertine” by Frederick R. Ewing. This book was eventually published in 1956 but the story behind the book started much earlier. 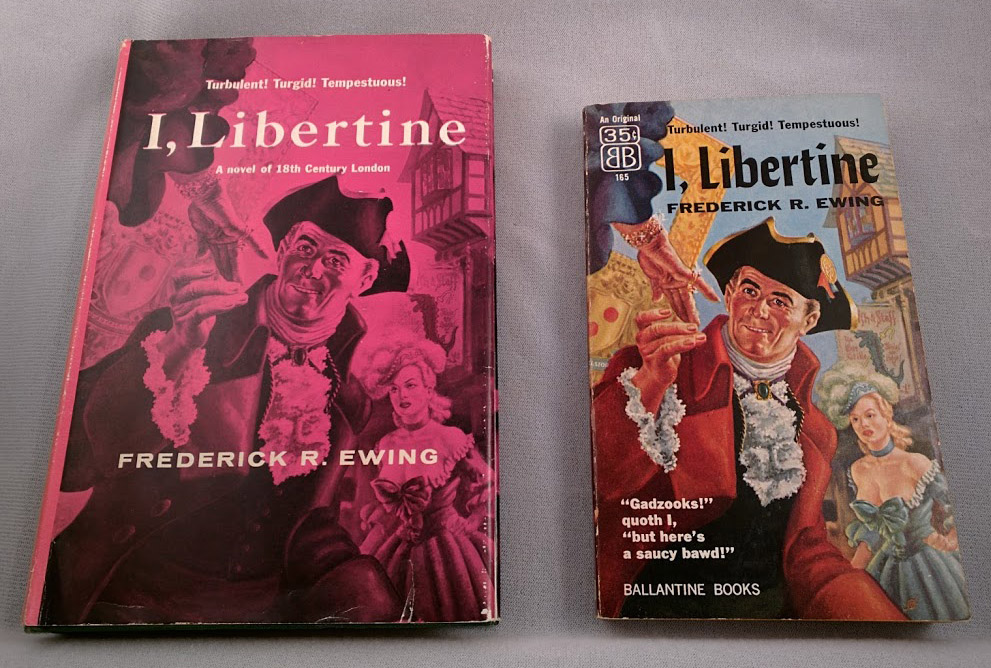 Hardback and paperback 1st editions of I, Libertine.

In the early 1950s, there was a radio personality named Jean Shepherd who worked covered the midnight to 5:00 AM shift for WOR in New York City. Shepherd believed he had a different type of listener at that time and so decided to be more spontaneous with his programming. This was a new concept at the time as most radio deejays used a scripted format. Shepherd became a fan favorite, even calling his followers the ‘night people’ and developed a way that listeners could identify each other by using the passwords ‘Excelsior’ and ‘Seltzer bottle’. Shepherd felt that his night people were better because they were more creative and paid less attention to rules and restrictions.

The development of the literary hoax behind ‘I, Libertine’ began sometime in April 1955. Shepherd went into a local NYC bookstore and tried to purchase a copy of an old radio script. At the time, bookstores had printed lists of published books and if the book wasn’t in that list then it must not exist. This was the case with the old radio script that Shepherd was looking for. An argument ensued between Shepherd and the clerk, which led to Shepherd’s topic of discussion on his own radio show that night.

While ranting about how a ‘night person’ would not have been restricted to using the printed list of published books, Shepherd made a comment about how his listeners should start going to bookstores and asking for books that didn’t exist as a kind of practical joke. Many listeners called in and soon a title and author who created for this nonexistent book. ‘I, Libertine’ by Frederick R. Ewing was born, supposedly written by an English author who specialized in eighteenth-century erotica. The listeners even added extra information about the author. They said Frederick R. Ewing was a retired Royal Navy Commander and had done a series on BBC about ‘Erotica of the 18th century.’

In the next few weeks, Shepherd’s listeners went to various bookstores and started asking for ‘I, Libertine’. The request of this book even began in other countries due to listeners who tried for their work. Booksellers became confused and started to contact publishers about this book that their customers kept asking for. The demand for the book even pushed the New York Times Book Review to add it to the their list of newly published books.

The literary hoax continued to grow. Some ‘night people’ created card files for the book and placed it in card catalogs in libraries around the East Coast. A Columbia University college student even received a B+ grade on a paper he wrote about Frederick R. Ewing. The Legion of Decency in Boston banned the book and a gossip columnist in New York reported having lunch with Freddy Ewing.

After about a month, the Wall Street Journal reported on the literary hoax and informed readers just how it all started. By this point, the hoax had gone international as well as grabbing the attention of the publishing world. Ian Ballantine from Ballentine Books got in contact with Jean Shepherd and they created a plan to actually write ‘I, Libertine’. With the help of science-fiction author Theodore Sturgeon, the book was written in 30 days.

130,000 copies of the book were published on September 30, 1956. The picture of Frederick R. Ewing on the back of the hardcover edition is actually Jean Shepherd. Sales of the book were rather slow but it is now considered a collector’s item.

Special Collections acquired two copies of ‘I, Libertine’. One in hardcover and one in paperback form. The dust jacket for the hardcover book actually has a print error in the ‘About the book’ section, listing the main character’s name as Lance Corday. The correct name of the main character is Land Courtenay. This error makes the hardcover even more of a collector’s item.