Posted on 2015 October 13 by Abhinaya Rangarajan

In this edition of the weekly blog, the Department of Special Collections and University Archives presents one of its many interesting collections of F. Scott Fitzgerald ephemera. The department acquired the ephemera as part of Robert L. Samsell collection purchased from J. Howard Woolmer, 1976. The ephemera are grouped into four subjects: Correspondence, Writings, Photographs and Miscellaneous.

F. Scott Fitzgerald was an American short-story writer and novelist. He had developed a keen interest in literature early in his life and pursued his literary ambitions at the expense of his formal education. He eventually dropped out of school to join the army. On one of his assignments as second lieutenant in Alabama, he met his Zelda Sayre whom he later married. The photographs in the collection consist of snapshots of Fitzgerald, Zelda and, daughter Scottie, as well as views of several of their residences.

Celebrated for his literary works, Fitzgerald started to gain fame as one of the country’s most promising young writers at the age of 24 when his novel This Side of Paradise was published in 1920. Some of his notable contributions amongst others include the “The Curious Case of Benjamin Button”, “The Diamond as Big as the Ritz”, and “The Beautiful and Damned”.

An exhibit marking the 25th anniversary of his death

Later in his career, he wrote what is credited as his greatest novel, The Great Gatsby. The collection also includes ephemera related to his several novels, including a film producer’s campaign book for the film adaptation of the novel. As part of the enormous posthumous success of The Great Gatsby, it went on to become required reading for virtually every American high school student, and has had a transportive effect on generation after generation of readers. 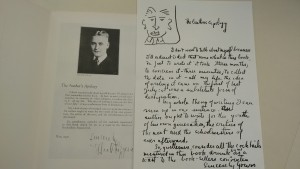 Reprint of F. Scott Fitzgerald’s handwritten draft of a promotion piece bound into copies of the 3rd printing of This Side of Paradise

The collection at McFarlin Library Special Collections [1976.003.1] also includes a reprint of Fitzgerald’s handwritten draft of a promotion piece bound into copies of the 3rd printing of This Side of Paradise among other writings.

This entry was posted in Collections, Guide to Literary and Related Materials, literature, Uncategorized. Bookmark the permalink.