Posted on 2015 December 14 by Milissa Burkart 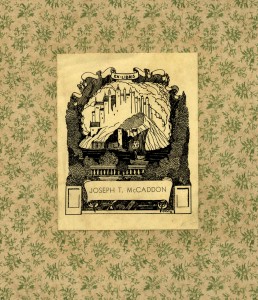 Sneak a peek under the proverbial circus tent of the Joseph T. McCaddon collection and you’ll catch a glimpse of the excitement and drama played out in the Wild West arenas of the Buffalo Bill Cody and Pawnee Bill shows. You’ll also get a taste of the behind-the-scenes tension of managing and maintaining the “Two Bills” enterprises.

Included in this mixed collection: 1) a series of letters, trans-Atlantic cablegrams, and telegrams, primarily between McCaddon, Colonel Cody, and Ben Hutchinson (Cody’s business manager), offering insight into the business of and internal politics within Buffalo Bill’s Wild West show; 2) what remains of a photo album containing 206 photographs featuring scenes from the 1899 Wild West show, taken both from the spectator’s viewpoint and behind-the-scenes; 3) samples of Pawnee Bill’s presentation and promotional material for his shows; and 4) a sampling of photographs and snapshots featuring Pawnee Bill’s Old Town Indian Trading Post and scenes from his ranch situated near Pawnee, Oklahoma.

As for Joseph T. McCaddon—he began his career as manager of the Adam Forepaugh Circus but later joined the Barnum & Bailey Circus as its general business manager.   As manager, McCaddon represented Bailey in many business matters, including Bailey’s 1894 purchase of a controlling interest in William F. “Buffalo Bill” Cody’s Wild West Show.   After Bailey’s death, McCaddon remained active in the business, acting as representative for his sister, Ruth McCaddon Bailey (Bailey’s widow) in her business dealings with the Circus and with the “Two Bills” enterprises. 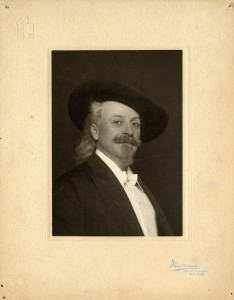 Buffalo Bill’s Wild West show was at its most lucrative when it played long engagements in places like Staten Island, London, and other European locations.   And, although the show was enjoying the most successful season in its history, having set up adjacent to the Colombian Exposition in Chicago (1893), it was evident that the show was running out of places to perform.   So it was that an idea was hatched that would eventually draw James A. Bailey into the affairs of Buffalo Bill’s Wild West. 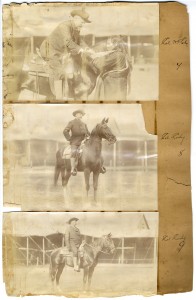 A page from the album featuring three views of Buffalo Bill in the show arena.

In 1894, a unique contractual arrangement was made between Bailey and William F. “Buffalo Bill” Cody—Colonel Cody would supply everything pertaining to the performance (performers’ salaries, livestock and props, lighting equipment, advertising material, programs and tickets, feed and groceries) and Bailey would furnish the cars, baggage stock and wagons, tents, seats, the cost of the show lots, licenses, and railroad transportation. Both parties would split the proceeds and concession profit. 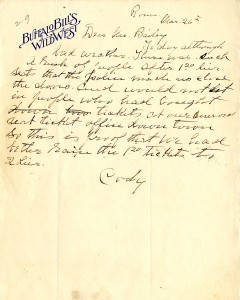 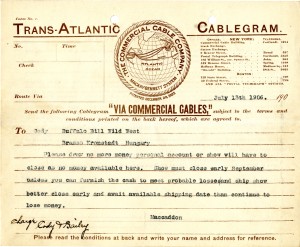