Posted on 2015 December 17 by Milissa Burkart 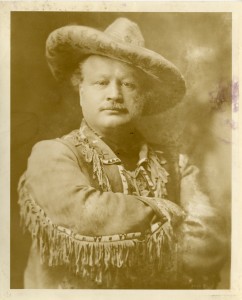 In 1895, Buffalo Bill’s Wild West show traveled to 131 stands in 190 days, covering a route of 9,000 miles, requiring the use of 52 railway cars! And, although Buffalo Bill’s barnstorming tours were highly profitable, the travel was torturous—in 1896 the show traveled 10,000 miles to 132 stops. In 1897 it played 104 cities—taking its toll on an aging and ailing Cody, on the stock and show animals, and on the personnel and performers—by the early 1900s, Cody began frequently announcing to audiences his plan to retire. 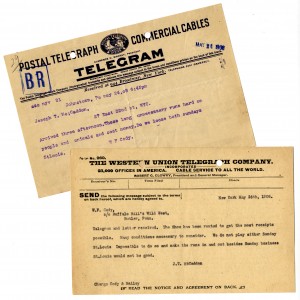 “…These long unnecessary runs hard on people and animals…” Cody to McCaddon. 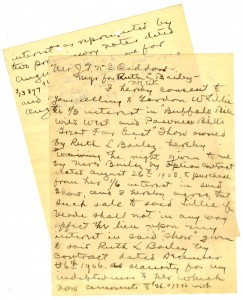 Cody agrees to the sale of the Bailey interest to Lillie. 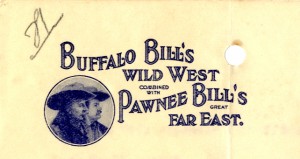 Official letterhead for the new show.

However, in 1908, after much negotiation with Bailey’s executors and Colonel Cody, Gordon W. “Pawnee Bill” Lillie purchased Bailey’s interest in Buffalo Bill’s Wild West—Lillie would act as business manager (for which he had superb acumen) and Cody as showman (undeniably his forte). They agreed to call their combined shows “Buffalo Bill’s Wild West and Pawnee Bill’s Great Far East, popularly known as the “Two Bill’s” show.

About the Photographer:  John C. Hemment, “The Instantaneous Photographer”, is credited with shooting the 206 photographs mounted in McCaddon’s photo album. The faded, sepia-toned images feature a variety of arena acts, performers, and behind-the-scenes activities from Buffalo Bill’s Wild West show of 1899.   Hemment specialized in the photo-documentation of current events in the areas of politics, culture, and sports; but, he is probably best known for his book, Cannon and Camera; Sea and Land Battles of the Spanish-American war in Cuba; Camp Life, and the Return of the Soldier, in which he chronicles his experiences in Cuba during the Spanish-American War.