Posted on 2015 December 2 by Anna Petross

Who hasn’t seen For Whom the Bell Tolls or read The Old Man and the Sea at some point in their life? Ernest Hemingway is one of the more well known authors of the “Lost Generation.” Born in 1899, Hemingway first worked as a correspondent after World War I before turning his hand to short stories and novels. He published 15 books during his lifetime and six were published posthumously. Hemingway suffered physical decline and mental and behavioral issues in his later years, including paranoia and possible depression. He committed suicide in April of 1961.

Hemingway left behind a legacy of an economic  writing style that is still emulated or avoided to this day. His themes focused on love, war, and loss which resounded with the population of his time and continue to resonant with today’s generation.

The correspondence series focuses primarily on Hemingway’s business issues, book deals, bank transactions, and some fan mail. The letters show the scope of Hemingway’s influence and life, with letters from around the world and in multiple languages. Those interested in the the business or financial aspects of Hemingway’s life would also find a treasure trove in our collection. 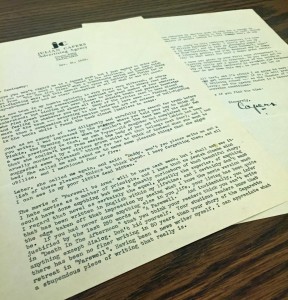 There are also a few letters written by Hemingway and his fourth wife Mary. Hemingway’s letter writing style is very different than his prose. His words flow and he tended to be a bit more verbose and personal in his private  letters. 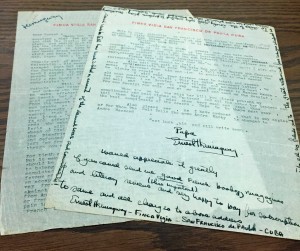 The writings series consists primarily  of press cuttings of reviews and publisher’s announcements; printed blurbs written by Hemingway for various art exhibit catalogs; a galley proof for The Hemingway Manuscripts, An Inventory written by Philip Young and Charles W. Mann; advance galley proofs for The Old Man and the Sea; and various handwritten note fragments.

The smallest series is the photographs, but the offerings are rich. There are 17 photos and 4 photo-negatives which include portraits of Hemingway, photos of Hemingway with Mary Hemingway, snapshots of Italian soldiers, a snapshot of a bullfight, and a photograph of John Dos Passos. 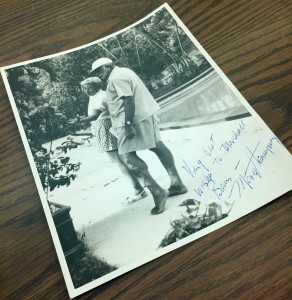 The collection provides a diverse and informative look into Hemingway’s life for the avid Hemingway student and the casual reader. The collection is housed offsite and does require a minimum 24 hour notice for access.