Posted on 2015 December 11 by Abhinaya Rangarajan

David Herbert (D. H.) Lawrence is one of the most versatile and influential figures in 20th-century literature. Best known for his novels, Lawrence was also an accomplished poet, short story writer, essayist, critic, and travel writer. The controversial themes for which he is remembered – namely, the celebration of sensuality in an over-intellectualized world – and his relationship with censors sometimes overshadowed the work of a master craftsman and profound thinker.

His novel Lady Chatterley’s Lover is one of the most famous banned books in the literary world. The book soon became notorious for its story of the physical (and emotional) relationship between a working class man and an upper class woman, its explicit descriptions of sex, and its use of then-unprintable words. Besides the evident sexual content of the book, Lady Chatterley’s Lover also presents some views on the British social context of the early 20th century. There are many reviews of this book that praise how D.H.Lawrence captured the class distinctions that prevailed during that time. 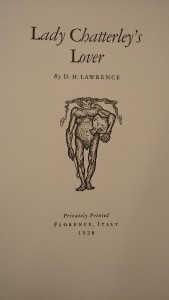 The first edition was printed privately in Florence, Italy, with assistance from Pino Orioli; an unexpurgated edition could not be published openly in the United Kingdom until 1960. In December 1929, Lady Chatterley was banned in the United States after its publication in 1928.  The Department of Special Collection and University Archives at McFarlin Library has a vast collection of various editions. 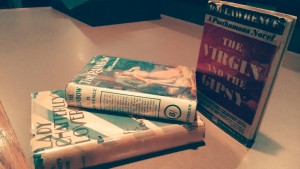 Some other works of D.H. Lawrence in Special Collections

Among other fictional works of D.H. Lawrence, Special Collections also has many volumes of The White Peacock, Sons and Lovers, and The Rainbow. Each book is available at the University of Tulsa McFarlin Library Special Collections during regular business hours.