Posted on 2016 January 8 by Anna Petross

Nearly every house has a cookbook, assorted favorite recipes and household manuals, even if they don’t realize it. Cookbooks, next to religious texts, are probably the most widely owned and recognized form of literature, at least in the Western world.

Dating back to nearly the tenth century, the earliest cookbooks in the Arabic, Asia, and European areas were for the high class, consisting mainly of favorite dishes and cultural references of the author with little information on the actual making of the dish.

As cookbooks continued to evolve, they began noting more information on reproducing the dishes, but still were mainly for the upper classes. Common dishes and peasant food were not included in these early recipe books.

However, the Industrial Revolution brought about the rise of the middle class. Cookbooks were no longer musing of rich men and haute cuisine. The Victorian era brought about the cookbooks for common domestics and housewives. They began to include more specific instructions on quantity and cooking times, as well as household management tips and guides.

As technology progressed, the everyday person gained access to recipes, ingredients, and cookware. This brought about more specialized cookbooks ranging from product driven recipes to regional recipes to cocktail mixing and everything in between.

The University of Tulsa Special Collections has a wide and diverse collection of recipe books and household manuals. Three that are considered staples of the modern Western era are Eliza Acton’s Modern Cookery , Beeton’s Book of Household Management, and Rombauer and Becker’s The Joy of Cooking. 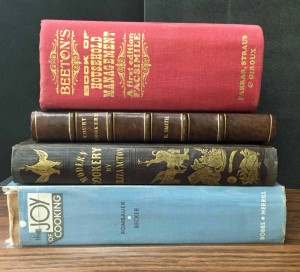 Perhaps of more historical value are the rare manuscript cookbooks (TX705.R43 1710z, TX705 M37 1828, and TX153 R43 1900z Undrsz). These handwritten manuscripts date back to the early 18th through 20th centuries and offer unique insights into the style of food, English language, and culture. Complementing the manuscripts is the department’s 1637 edition of The English Housewife (TX144.M37 1637). The quaint language aside, the book offers a treasure trove of authentic British recipe and domestic guidance on subjects relating to managing a household. 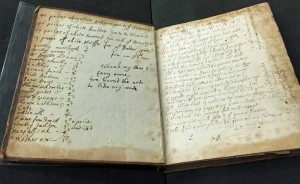 For a glimpse into the gendered, political, and social realm of housekeeping, Special Collections has several works to offer. The English Housekeeper, written by the housekeeper Elizabeth Warburton, provides recipes for the middle to upper class households, complete with diagrams of cooking areas and arrangement of food platters. Lydia Balderston’s Housewifery aims at “professionalizing the work of the home.” Dr. Chase’s Recipes or Information for Everybody is a delightful encyclopedia for just about any topic, including “Female Weakness and Irregularities.” The interesting note for Dr. Chases Recipes is that the listed audience is primarily male while most other books on these topics were written with a female audience in mind. Finally, The Up-to-date Waitress is a fascinating look at female employment in the Victorian era. Published in 1914, the book describes dress, service, maintenance, and various social constructs of upstanding dining establishments where women were employed as waitresses. This is a far cry from waitressing today and provides an interesting look at what the early 20th century considered proper for dining procedures and female employment. 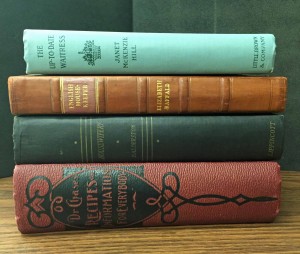 The University of Tulsa’s own is represented with First Lady Peggy Upham’s Peggy’s Table, which highlights recipes from many regions and ethnicities, complied by Mrs. Upham and tested by TU’s own Executive Chef, Tim Anderson. 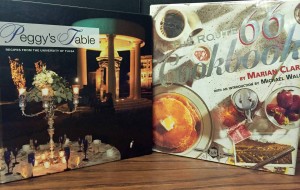 If you have a hankering for meatloaf, Meatloaf: Themes and Variations is the best place to start. For product based recipes, Bisquick and Hasty-Bake have their own cookbooks. Many other product and dish driven cookbooks abound in Special Collections.

Last, but not least, is the piece de la resistance! The Savoy Cocktail Book offers an excellent assortment of recipes during the Prohibition. Published in 1930, three years before the reversal of Prohibition, the recipes are grouped by type. If you fancy a toddy, sour, shrub, highball, julep, punch, or coolers, mix up a classic or find a new spin in this fascinating work. 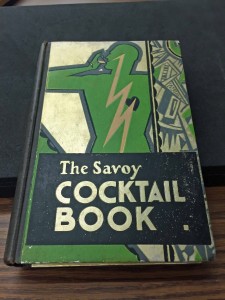 Whatever your taste or task may be, the University of Tulsa Special Collections has a cook book or household manual to meet your need. All are available during regular hours, Monday-Friday 8AM to 5PM.