My recent find, in the University of Tulsa’s Special Collections shelves, is a small translated edition of Buffon’s Natural History. This small volume’s complete title is “Buffon’s Natural History: containing a full and accurate description of all the animated beings in nature. In four parts. Quadrupeds—birds—fishes—reptiles. Illustrated with two hundred engravings”. This work was published by Milner and Sowerby in 1854.  This volume was intended for cheap mass publication. The Milner and Sowerby publishing house was one of the most influential in the production of affordable copies during the Industrial Revolution. Many other influential works were reprinted and edited by Milner and Sowerby to create cheap publications for the consumption of the middle and lower classes. This Victorian edition of Buffon includes many small detailed engraving of animals, which accompany corresponding text.

Georges-Louis Leclerc, count de Buffon, was an 18th century French aristocrat and naturalist. Buffon was commissioned to catalog the natural history collections owned by the French monarchy, however he went on to incorporate all known aspects of nature. He began work on his magnum opus Histoire naturelle, générale et particulière, in 1749. Buffon was only able to complete 36 of the proposed 50 volumes. The Count de Lacépède completed eight more volumes, making the total number of volumes for the first edition 44. Later editions were often edited, abridged and consolidated into thematic groupings.

These early works about natural history are interesting to read from a modern perspective. Buffon and later editors did not write in the dry empirically scientific style we are familiar with today. Buffon intentionally added philosophical ideas and opinions, associated with the organisms, to the known scientific data. Buffon’s observation that the African lion is more ferocious than the North American lion, because of geographic climate, seems a bit limited. He describes the peacock as having “the plumage of an angel, the voice of a demon, and the stomach of a thief.” This rather poetic portrayal would not be included in any modern scientific descriptions. According to Jean Piveteau, an editor for the Encyclopedia Britannica, Buffon wanted to interest the reader and keep the text from becoming too monotonous. 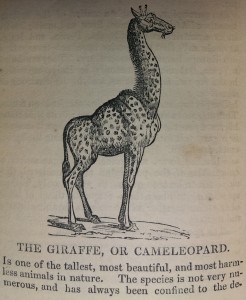 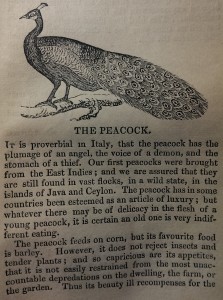 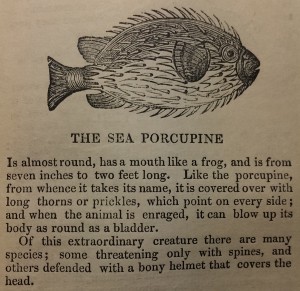 This entry was posted in Collections, History and tagged animals, buffon, natural history. Bookmark the permalink.