Quite a few of our recent blog entries have focused on books. I’m excited for these blogs because so many are unaware of the vast array of books we have available. The history and knowledge in the Special Collections stacks is exciting and invaluable.

However, I would like to take a break from spotlighting the interesting tomes and focus once again on a small collection that has much to offer. The University of Tulsa Special Collections has a compact collection of World War I and WWI-era sheet music. The sheet music may seem like nothing more than ephemera or a glimpse of pop culture from the Great War, but there is so much more to this collection. 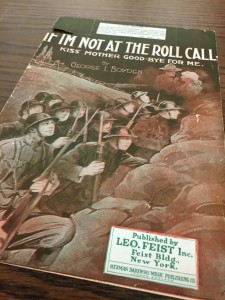 World War I was a time of change. The war ushered in the era of Modernism, set the stage for many of the conflicts we continue to see around the world today, globalized and industrialized nations in a manner hitherto unknown, and brought about much of the staunch nationalism we see today. 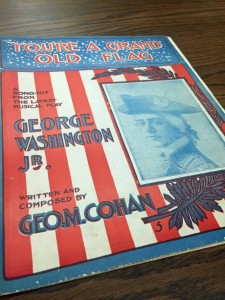 These changes and many other were captured by the composers and lyricists of the World War I era. The sheet music offers a glimpse into the propaganda, sentiments, hopes, fears, and ambitions of Allies. In the collection, there are well-known favorites that are still played today, such as “You’re a Grand Old Flag,” “The Stars and Stripes Forever,” and “Roses of Picardy,” which is probably one of the most famous songs written during World War I. 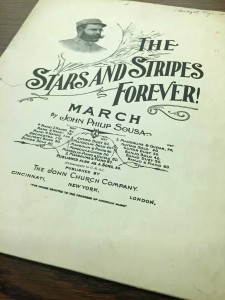 As expected, the majority of the sheet music are patriotic or military songs. They embody the varying emotions of soldiers and families, such as patriotic duty, sorrowful goodbyes, enthusiastic patriotism, and many more. “If I’m Not at the Roll Call, Kiss Mother Good-Bye for Me,” “The Rose of No Man’s Land,” “91st Wild West Division,” “Boots and Saddles: A Soldier’s Farewell,”  “The American’s Come,” “Uncle Sammy,”  “It’s a Long, Long, Way to Tipperary,” “In Flander’s Fields,”  “Keep the Home-Fires Burning (‘Till the Boys Come Home),”  “Pack Up Your Troubles in Your Old Kit Bag and Smile, Smile, Smile!,” “Are You the O’Reilly,” “The National Anthems of the Allies (United States, Great Britain, France, Belgium, Russia, Japan, Serbia, Italy, Rumania, Portugal, Cuba),” “The Navy Took Them Over and the Navy Will Bring Them Back,” and “Long Boy” are all examples of these types of songs. 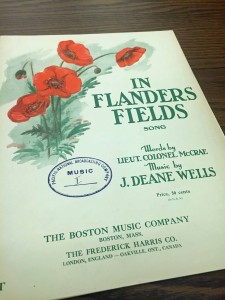 Not to be forgotten are the ladies of the time. Several of the sheet music offerings focus on the love and family life of soldiers, which was strictly heterosexual in the public eye. A good soldier was often portrayed as a young lover or family man, fighting to keep his beloved safe and free. The moods of the songs range for melodic love songs to jaunty ditties soldiers sang to keep their spirits up in the trenches. “Somewhere in France with You” “Tip-Top Tipperary Mary” “K-K-K-Katy” “Just a Baby’s Prayer at Twilight (For Her Daddy Over There),” and “Blue Bell” show the variety of songs based on love and family.

Two particular songs need special mention. “Get Behind the Girls Behind the Boys” is one of the earliest “female power” songs written. The lyrics powerfully remind the American general public that while the boys were fighting “over there,” it was women who were keeping things running in the factories, filling in the jobs left open by soldiers leaving for war, and that women were playing an important role in the war effort. Still a far cry from today’s “female power” songs, “Get Behind the Girls Behind the Boys” was progressive for its time and shows some of the changes that WWI was producing on the home front, socially and politically. 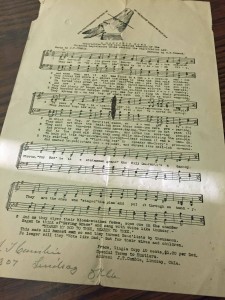 Finally, not in the WWI Sheet Music Collection, but of honorable mention, is “A Souvenir Song Descriptive of the Late Special Session of the Oklahoma Legislature while Passing the Registration Law.” (M1664.S67 C86 1916 Ovrsz) The  “Souvenir Song…” was written in 1916 as a satirical ditty which was directed towards the Democrat-sponsored Registration Law of 1916. The Registration Law required that all voters had to register and name their party affiliation. The Law had racial significance, as it was intended to discourage African-Americans from exercising their political rights, but was also aimed at discouraging Socialists.  Socialism had a strong base in the Oklahoma tenant farmers, but the Democrats believed that they wouldn’t want to expose their affiliation with the Socialist Party.  Between the Registration Law and the Green Corn rebellion, the Socialist party had almost completely disintegrated by the end of World War I.  For those unfamiliar with WWI Oklahoma history, the Green Corn Rebellion was a small uprising of primarily Southeastern Oklahoman farmers in protest of the war draft. The name was derived from the group’s plan to march on D.C. and subsist on roasted green corn they found along the way. The group was ultimately ratted out by an informer and the Green Corn Rebellion never really materialized. The Oklahoma Socialist party, which had been popular until then, lost its momentum and never regained it.

The World War I sheet music collection and “A Souvenir Song Descriptive of the Late Special Session of the Oklahoma Legislature…” are available for viewing during regular hours at the University of Tulsa Special Collections.