Special Collections is pleased to announce that a new collection has been processed. Thanks to the generosity of Dr. James Ronda, former history professor here at the University of Tulsa, Special Collections now has a robust offering of turn of the twentieth century records.

These hundred year old records are made from shellac and range from miniature discs of approximately four inches in diameter to large records spanning 12 inches in diameter. Records made between 1898 and the 1950s which play at a speed of 78 revolutions per minute are also known as “78s.” The Dr. James Ronda Jazz and Popular Music collection offers an excellent variety of music, consisting primarily of jazz, gospel, and classical pieces. There is also various military songs, love songs, comedy sketches, political speeches, and other interesting genres. The records range from smaller brands such as Banner, Brunswick, Cameo, Gennett, Gray Gull, and Romeo to household names such as Columbia, Victor, and Victrola. 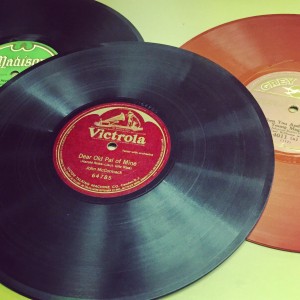 Perhaps the most intriguing aspect of the collection is the vast array of artists and personalities captured in these early recordings. There are speeches by William Jennings Bryan, Will Rogers, and Franklin D. Roosevelt, comedy sketches by famous Uncle Josh personality Cal Stewart, songs by well-known artists such as Henry Burr, Gene Autry, Enrico Caruso, John McCormack, Mischa Elman, Jascha Heifetz, Evan Williams, and instrumental pieces performed by the Philadelphia Concert Orchestra and Paul Whiteman and His Orchestra, as well as famous violinist Nullo Romani.

Cal Stewart was an early vaudeville actor and recorder. He created the Uncle Josh character which soon won the hearty laugh of the American public. Paul Whiteman was known as the King of Jazz, composing over 3,000 original pieces and was earning around  $1,000,000 by the early 1920s.

There is even a miniature children’s book with corresponding mini-records with the character’s parts. The Pet Bubble is circa 1919 and tells the story of a lonely boy who is given a pipe by his fairy godmother. The pipe blows bubbles that hold Mother Goose characters who come out to play and sing with him. Each book contains three records with songs from the stories. 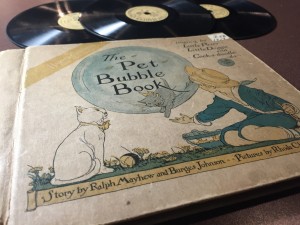 The records are available during normal business hours, Monday through Friday from 8:00 AM to 5:00 PM at the University of Tulsa Special Collections and University Archives.