This week the department of Special Collections and University Archives has acquired a set of 24 cabinet card mounted photographs mostly taken in Indian and Oklahoma Territories and generally of Native American related subjects.

The collection was assembled by Esther Hoyt (d. 1942) who taught at several Indian schools in the late 19th and early 20th centuries.  After she left the non-reservation school at Tomah, Wisconsin she refused to teach in any of the large institutional schools ever again.  The rest of her career was spent at local day schools, most notably the San Ildefonso school, where she started the art program.

Most of the images in this collection were taken by Thomas Croft, who was a professional photographer first in Arkansas City, Kansas, and later Oklahoma City, Oklahoma Territory.  Thomas F. Croft moved to Arkansas City from Illinois in 1885. In 1893 he likely took the famous photograph of the Land Run Opening the Cherokee Strip for settlement while working for a photographer named Prettyman.  He regularly traveled to Indian Territory to shoot images of Native Americans, such as the one we are examining. Later on in his career he moved to Oklahoma City, Oklahoma Territory 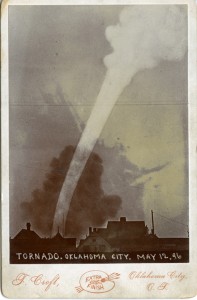 On May 12, 1896, Croft took the first known photograph of a tornado.  The photograph was taken in Oklahoma City.  This was an F2 tornado that hit five miles NW of downtown Oklahoma City, striking four farms, destroying one barn, killing some poultry, and tearing the kitchen off a farm house.

In the weeks following this tornado was the May 1896 tornado outbreak sequence, which produced a number of deadly tornadoes through out the Midwest.

The Librarian of Special Collections and University Archives, McFarlin Library, The University of Tulsa since November 2005.He holds a Masters in Library and Information Studies from the University of Oklahoma, and a Bachelor of Arts in History and Anthropology from Oklahoma State University. He has worked in McFarlin Library since 1986.
View all posts by Marc Carlson →
This entry was posted in Acquisitions, Collections and tagged acquisitions, collections, history, Indian Territory, photographs. Bookmark the permalink.