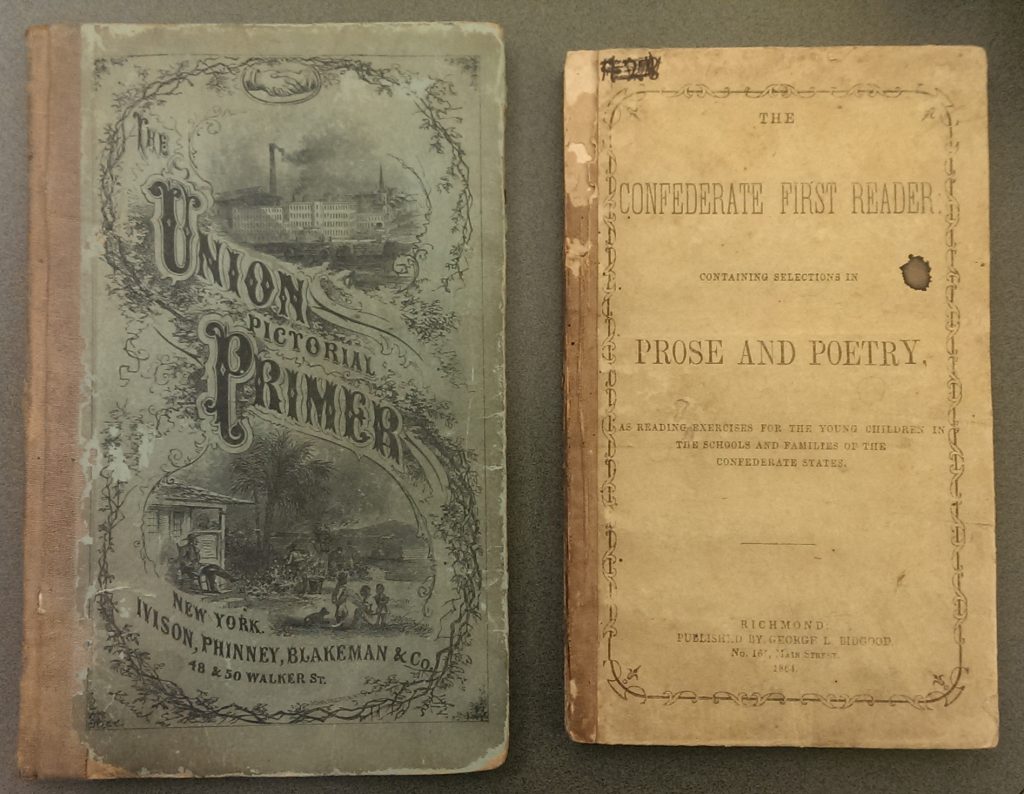 After being away from the Collections all summer it was nice to be able to peruse the Special Collections stacks again. I can always discover something new when looking through the bookshelves and archive boxes. This week I discovered two Children’s reading primers from the 1860s. What struck me about these two small volumes was the clear juxtaposition of Civil War loyalties being exhibited to young students. One primer is titled “The Union Pictorial Primer” and the other is titled “The Confederate First Reader”.  Seeing these two primary education textbooks, printed only two years apart, has vividly illustrated the depth of separation between the North and the South. It should be noted that the Union Primer is designed for very young readers while the Confederate Reader is geared for slightly older students.  From my own modern perspective, and being so far removed from the historical event, seeing these books side by side has added a greater reality and insight into the Civil War.

The Sanders Union Pictorial Primer: Introductory to the Union Readers by Charles W. Sanders, A.M. was published in New York in 1866. On the publication page verso, this primer was “entered according to Act of Congress, in the year 1866”; one year after the end of the war. The Union Primer text has several pro-Union features. The images on pages 12, 32, 44-45, and 47 all have references to the war and Union victory. On page 12 Children are dancing in front of a white robed female warrior figure holding the Union flag and the word “UNION” spelled out over her head, representing victory. Behind the victory figure is a Steam ship, train, farmer, and governmental building. The idea behind depicting these particular images is to be representative of the progress and prosperity that has come from the North winning the Civil War. Page 32 depicts a one-legged soldier dressed in a Union uniform. This page instructs young readers to be compassionate to the wounded soldiers. This image instills in in young readers the idea to be kind to all individuals in need but to also be particularly considerate to those who have fought for the North. 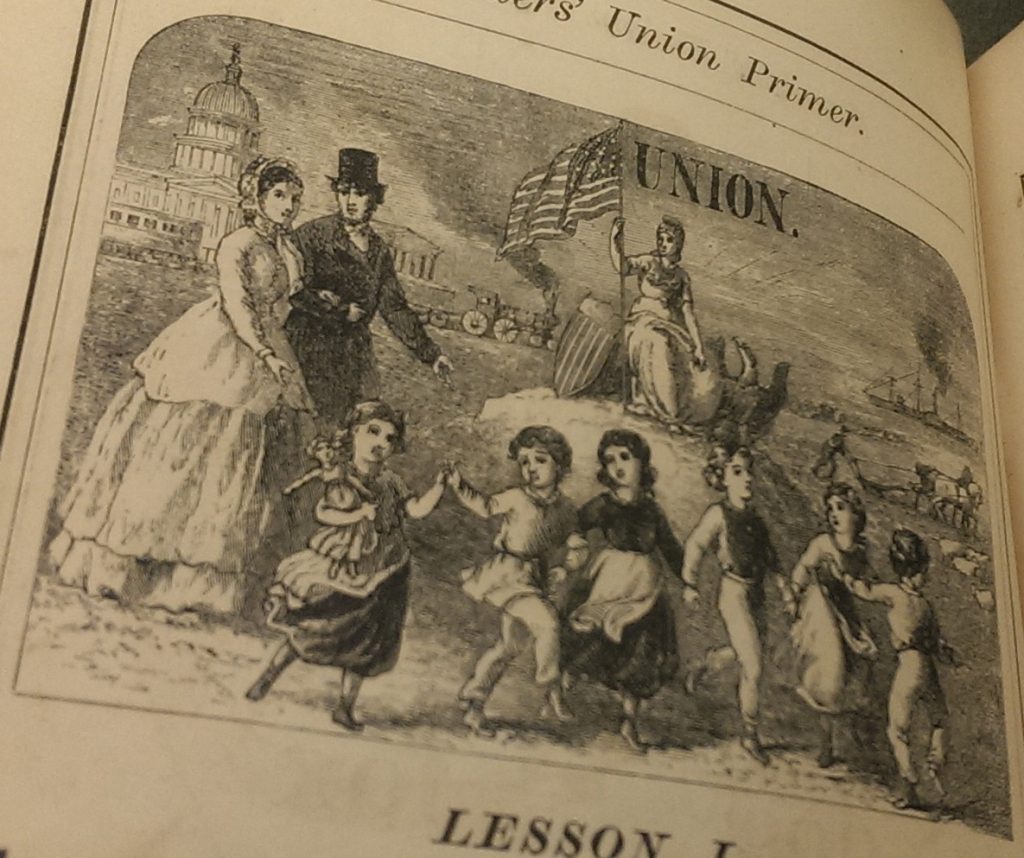 Pages 44 and 45 depict a large group of children at a picnic/festival. In the center background a ground of girls dance around a Union flag. The text accompanying this images references play and having a good time and eating a feast. The image on the opposite page shows the group leaving the picnic in a carriage with the Union flag being held aloft. The text references the fun day and then returning to their “Sweet Homes”. The flag in these images represents Union victory and this victory has made it possible for the children to have a day of enjoyment with games, good food and then the ability to go “home, sweet home”. On page 47 a parade of victorious Union soldiers are shown marching in front of a governmental building, which is adorned with Union flags, and cheering crowd. The text states the men have had a hard time at war and are now returning home. This image is descriptive of the collective excitement at the Northern victory and teaches young students to praise and accept the Union victory.

The Confederate First Reader containing selection in Prose and Poetry as Reading exercises for the young children in the Schools and Families of the Confederate States was published in Richmond Virginia in 1864. On the publication page verso, it states that this particular volume was “entered according to the Act of Congress of the Confederate States in the year in 1864”, one year before the end of the war.  After reading through the preface and table of contents I did not discover anything that seemed overtly pro-South except for an advertisement on the back cover: “Now Ready, The Army Songster. Dedicated to the Army of Northern Virginia. The best collection of Songs published in the South”. The Confederate First Reader is mostly comprised of excerpts from Aesop’s Fables, Bible stories, and various short poems. This book is intended for students reading at a higher level than that of the Union Primer. I would be curious to see a pictorial primer from the Confederate side. This could provide a better comparison of ideologies presented to children during and right after the Civil War.