Posted on 2016 October 13 by Jennifer Murphy

The University of Tulsa Special Collections and Archives is well known for its collections of American and British Literature. Our department is fortunate enough to carry multiple editions of manuscripts. We house many editions of John Milton’s (1608 – 1674) famous epic poem, Paradise Lost. This blank verse poem depicts the Fall of Mankind through the biblical story of Satan’s temptation on Adam and Eve that banned them  from the Garden of Eden. Paradise Lost argues that separation from God parallels the sinful nature of man. 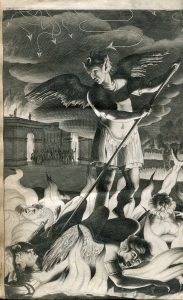 One of our earliest editions of Paradise Lost is the fourth edition, A Poem in Twelve Books, published in 1688. It was published twenty years after the first edition in 1667. This edition was one of the earliest subscription publications, which included the first illustrated edition and first folio edition. It was printed on fine quality paper adorned with sculptures in London by Miles Flesher, for Richard Bently, at the Post-Office in Russell-Street, and Jacob Tonson at the Judge’s Head in Chancery-lane near Fleet Street.

In 1688, due to the Glorious Revolution between the Whigs and Tories, Milton began to gain notice again. Milton was praised for his commitment to the republic. Jacob Tonson wanted to publish Paradise Lost in high quality print to praise Milton’s poetry and show the piece in its best form. Milton modeled Paradise Lost’s twelve books after Publius Vergilius Maro’s (Virgil) Aeneid. The illustrations in the fourth edition are dedicated to John Baptist Medina and Bernard Lens. The remainder are dedicated anonymously. Milton’s stance on a chapter’s topic is dictated through each book’s illustration. 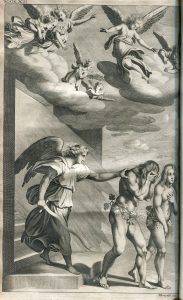