McFarlin Special Collections is home to several different collections relating to World War I.  The objects in these collections range from photographs to maps to sheet music.  One intriguing item in the collection relating to WWI is the wireless telegraph signal log from the H.M.S. Crusader.  This was a tribal class destroyer stationed in the English Channel and the North Sea from 1914-1916.  The ship won the Battle Honour for its work off the Belgian Coast defending against German naval forces.  The construction of the ship was completed in October 1909.  Its life as a naval ship was short-lived as it only saw action in World War I and was sold for scrap metal in 1920.  However, its legacy lived on in two other ships built later on which both carried the same name: H.M.S. Crusader.

The logbook in Special Collections has entries from 23 October through 2 November 1914, almost 102 years ago.  One of the beginning pages of the book sets out the instructions for how to keep the logbook properly.  One of these rules was that the captain of the ship was to check the log once a week to ensure that it was being properly kept.  Each entry contains the date and time of the transmission, which ship sent the message and which ship the message was sent to, any notes about the transmission, and the message itself.  These messages typically consisted of sightings of the enemy ships or just simple directions to the naval officers such as the entry on October 24th that states “Please make targets as simple as possible.”  This logbook can be seen at Special Collections on Monday thru Friday from 8am – 5pm. 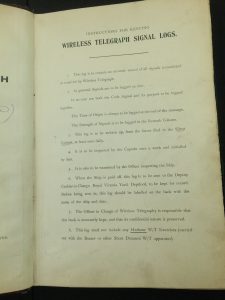 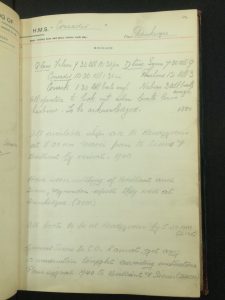 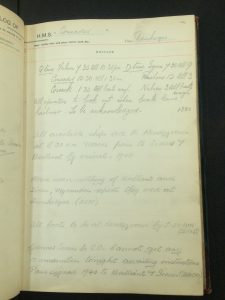 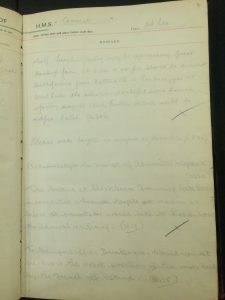 This entry was posted in History and tagged H.M.S. Crusader, Navy, telegraph, World War I. Bookmark the permalink.