Posted on 2016 December 2 by Jennifer Murphy 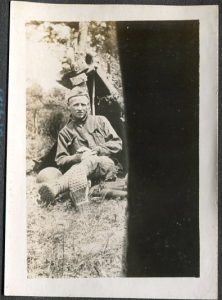 The “Rainbow” Division was established in August 1917. It was made up of volunteers from the regular army units scattered throughout the United States. Gruenberg’s section was formed from the Tulsa Ambulance Company into a unit of the National Guard. Their unit met up with the other sections at Camp Albert L. Mills on September 2nd. 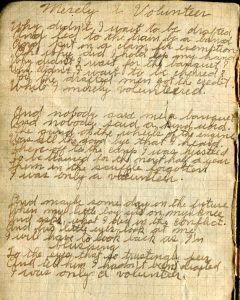 On the morning of November 1st, six transports arrived at the French seaport in St. Nazaire. The unit spent about 2 years in France pulling wounded and transporting them for medical attention. They returned home on April 17, 1919 on the U.S.S. Mount Vernon.

This collection contains numerous personal ephemera, some of which includes Gruenberg’s diary (1917-1918), soldier’s pay record book, Gruenberg’s dog tags and brass key on a leather thong, and one pair of regulation leather leggings. Within the photographs, there is a group photo taken of the 42nd (Rainbow) Division, in Tulsa, Oklahoma, in 1927. 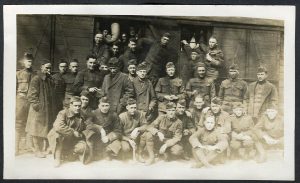 This collection was donated by Gruenberg’s son, Charles Gruenberg, in September 1991. The Victrola records have been converted into digital files and can be listened to as part of the collection.

Our collections are available during normal business hours, Monday through Friday from 8:00 AM to 5:00 PM at the University of Tulsa Special Collections and University Archives.

This entry was posted in Collections, History, World War I and tagged collections, gruenberg, history, Tulsa, World War I, WWI. Bookmark the permalink.