Posted on 2017 February 24 by Hannah Johnson

Elizabeth Jennings was a British poet from the twentieth century. She spent most of her life in Oxford England and was educated at St. Anne’s College. For a few years she worked in advertising, libraries, and publishing, then devoted all of her energies to becoming a writer. In her lifetime she published over twenty books of poetry and worked as an editor and critic. Jennings’ Catholic faith was a major influence in her life and much of her poetry centers around this faith and devotion. Her first small booklet of poetry was published in 1953 simply titled Poems. Many of her poems exhibit deep contemplation on her own spirituality and physiological state.

Her poetry was praised for its technical craft and plainspoken objective style and she wrote for both children and adults. In 1955 she won a Somerset Maugham Award and the prize money allowed her to visit Italy. This expedition greatly influenced her life and poetry. In the nineteen-sixties Jennings suffered from mental illness and this difficult time produced one her most famous poem collections The Mind has Mountains, published in 1966. Despite, or perhaps because of, her traditional differences from the other contemporary poets, her works remained popular in spite of changing literary tastes and interests. Jennings died in 2001.

Here are two examples of her published poems.

When the gardener has gone this garden

It is so spruce, a metaphor of Eden

And even more so since the gardener went,

Quietly godlike, but of course, he had

Not made me promise anything and I

Had no one tempting me to make the bad

Choice. Yet I still felt lost and wonder why.

Even the beech tree from next door which shares

Its shadow with me, seemed a kind of threat.

Everything was too neat, and someone cares

In the wrong way. I need not have stood long

Mocked by the smell of a mown lawn, and yet

I did. Sickness for Eden was so strong.

The radiance of the star that leans on me

Was shining years ago. The light that now

Glitters up there my eyes may never see,

And so the time lag teases me with how

Love that loves now may not reach me until

Its first desire is spent. The star’s impulse

Must wait for eyes to claim it beautiful

And love arrived may find us somewhere else.

The University of Tulsa Special Collections and Archives has a small collection of her notebooks and papers. This collections ranges from 1973 to 1992 and contains working drafts of 2,225 poems. These lined school notebooks are almost entirely full of her poetry with notes and corrections. She usually only wrote one poem per sheet of paper in a seemingly quick and assured manner.  Upon acquisition of this collection it was understood that all of the manuscripts were unpublished works. The themes and topics of these poems range from faith, artists, love, composers, emotions, writers, etc.

A draft poem found in the TU collection, box 4, folder 1 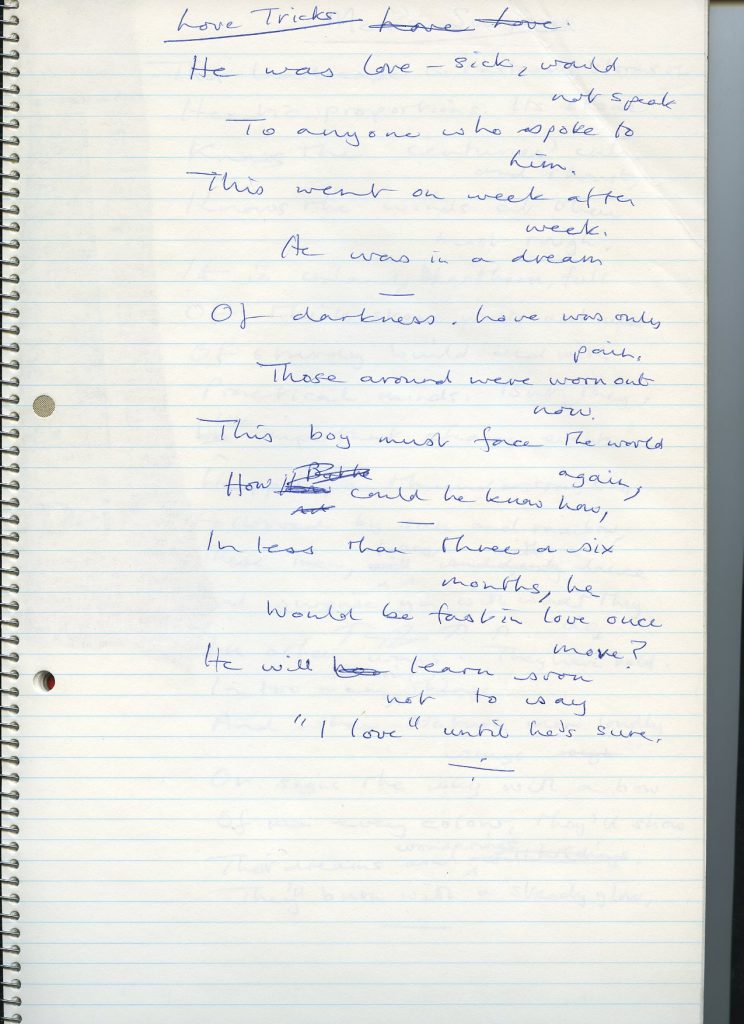 He was love – sick, would not speak

To anyone who spoke to him.

This went on week after week.

He was in a dream

Of darkness. Love was only pain.

Those around were worn out now.

This boy must face the world again,

How could he know how,

In less than three or six months, he

Would be fast in love once more?

He will learn soon not to say

This entry was posted in Collections and tagged British, collections, manuscripts, poetry. Bookmark the permalink.