While I was trying to decide what to write my blog on for this week, I started just scrolling through our online finding aid to see what would catch my eye. This is how I came across the Augustus Loftus Correspondence (1984.001). This is a collection of letters written to Lord and Lady Loftus between 1821 and 1904. Lord Augustus William Frederick Spencer Loftus was a British diplomat who worked as an ambassador to many countries across Europe including Austria, Prussia, and Russia and was the governor of New South Wales from 1879 to 1885. While he served as the governor to this Australian region, he named a town there Emmaville in honor of his wife in 1882. Lord Loftus had a long career as a British diplomat. He began his work in 1837 at the age of 20 and continued on until 1899, just 5 years before his death. His collection of correspondence includes letters from members of the nobility from across Europe and a few members of the British Royal Family. 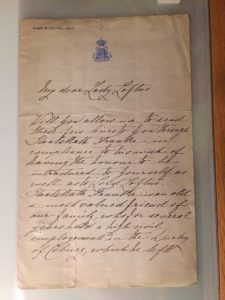 The letters in the collection focus on a range of subjects from responses to dinner invitations to political inquiries. One letter is a royal invitation, written in French, from Le Grand Mouréchal de la Cour, the Grand Marshal of the Court. This position was responsible for the economic affairs of the court in Berlin and would have been the person to organize receptions for the crown.  There is another letter from the Archbishop of Canterbury, Archibald Campbell Tait, offering his assistance to Lord Loftus in his plan to erect an English church in Berlin. A letter written on December 12, 1870 asks Lord Loftus to intervene with the Prussian authorities to make improvements to the conditions in which the French prisoners of war were being kept. This was right in the middle of the Franco-Prussian War. Though Lord Loftus was no longer the Prussian ambassador at that time, the letter suggests that he had made a good impression and still had influence with them. Another letter of note is addressed to Lady Loftus and is from Adelaide the Duchess of Schleswig-Holstein and the niece of Queen Victoria. It is meant as an introduction to one of the Duchess’s acquaintances with hopes that he will be able to meet the Loftus’s while in Berlin. To me, the most interesting letter is one that marks an important honor in Lord Loftus’s life. This letter is from the Registrar Secretary of the Order of the Bath informing him that Queen Victoria has decided to bestow on him the honor of becoming a Knight Commander of the Order of the Bath. This position would have been a great achievement as it is the fourth highest honor a British citizen can receive. This collection of correspondence has many more letters with intriguing contents. The collection’s record can be found here: http://www.lib.utulsa.edu/speccoll/collections/loftus/index.htm and it can be viewed during the reading room’s operational hours (Monday – Friday 8-4:30). 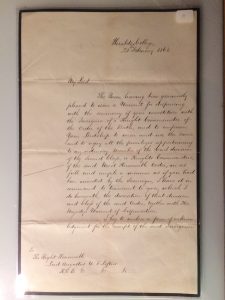