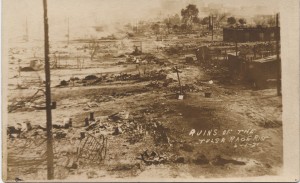 Race riots have occurred in numerous cities across the United States including Atlanta, New York, Chicago, Cincinnati, Detroit, Los Angeles, Louisville, and Washington D. C. Unfortunately, Tulsa also suffered from the blight of racism. In 1921, racial tensions in Tulsa reached an all-time high for two days in late May and early June. Like many historical events, the Tulsa Race Riot of 1921 has through the years become clouded by urban legend and speculation. In the Preface to Scott Ellsworth’s 1982 Death in a Promised Land: The Tulsa Race Riot of 1921, Dr. John Hope Franklin, whose goals continue to inspire Tulsa’s John Hope Franklin Center for Reconciliation, wrote “Sixty years have passed [since the riot], and there are not many people alive who are able to recall the events with the reliability that the historian requires. One must be extremely careful, moreover, in using sources, oral or written with care and good judgment, appreciating the full dimensions of the tragedy, but resisting the temptation to be pretentiously maudlin or excessively moral.” Though we may never know all of the events that transpired that day, many writers, historians, and even students attempt to uncover more of the facts. The 1921 Tulsa Race Riot collection is housed in McFarlin Library’s Department of Special Collections and covers almost 80 years of archival materials concerning those two days in late spring. 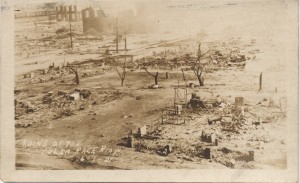 This collection, which consists predominantly of the research materials and notes from researchers, continues to grow as we often receive more materials year round. We’ve acquired other materials from various sources between 1988 to the present including photocopies of the local press coverage, articles and essays on the subject, an annotated map, a video recording and photographs of the riot and its aftermath. Also part of the collection is a video recording of the 1999 Weller/Grossman production of “In Search of History: The Night Tulsa Burned” that aired on the History Channel. Also included are 14 audio-cassette recordings of 13 interviews with witnesses to the riot conducted by Scott Ellsworth, a copy of The Tulsa Race Riot of 1921 by I. Marc Carlson, Librarian of Special Collections, photocopies of journal articles from 1921 and after, and other research materials. Another addition to the collection is a tape of a lecture given on October 18, 1989 at the Allen Chapman Activity Center on the University of Tulsa campus by Wilhelmina Howell and Mabel Little, two women who lived through the riot.

In 2009, Special Collections acquired the research materials of William M. O’Brien, a local historian and author of Who speaks for us?: The responsible citizens of Tulsa in 1921. O’Brien is the son of Gerald F. O’ Brien, a lawyer who during his time in Tulsa served as a judge on the Tulsa County Court of Common Pleas and was a witness to the events of May 31 and June 1, 1921. The O’Brien collection contains various materials related to the social and cultural atmosphere of Tulsa in the years before the riot, copies of primary materials such as governmental correspondences, court records, briefs, and transcripts, and nationwide ephemera concerning the riot including newspaper and magazine articles.

Through the preservation of the 1921 Tulsa Race Riot archival materials, McFarlin’s Department of Special Collections assists scholars and historians in their pursuit to form a more accurate picture of this unfortunate and momentous event, which spurred a community to come together and forge ahead with the process of reconciliation.