Some of our collections consist of hundreds of books or thousands of pages housed in hundreds of boxes, but some are small enough to fit into one slim envelope-type box.  The Richard Assmann Pencil Sketches (2003.032) may seem unassuming but that does not make them any less interesting.  This entire collection is made up of 2 small pencil sketches on paper that measures 7X9 inches. McFarlin Special Collections and Archives purchased these 2 delicate images in 2003 from Tavistock Books.

Richard Assmann (1887-1965) was an illustrator from Germany who found himself in Europe during World War I.  When doing a search for him, there are few sources related to this artist but many for the meteorologist and the TV personality of the same name.  The most interesting result related to this artist is for an ebay-like website that deals strictly in collectible postcards.  This site has more than 120 postcards illustrated by Assmann ranging in subject from religious scenes with saints to public figures such as Ottokar Kernstock to scenes of everyday life in Germany. 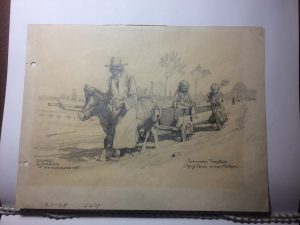 The two pencil sketches in our collection are both dated to 1915 and are signed by the artist.  They are captioned in German.  The caption for the first sketch translates to “Galacian Tragedy. A Mother’s Funeral.”  It shows two small children riding in a cart on top of a casket.  The cart is pulled by a cattle with a man walking beside it.  The young boy carries shovel while the man, presumably the father, carries a small cross.  The three figures all have down-turned faces.  The second sketch, entitled “German Artillery Observer in Ostruco,” shows two very tall ladders with a man sitting atop each one.  These men are looking through some sort of device off into the distance.  In the foreground, there is a small group of soldiers paired off into smaller groups of two or three.  These soldiers observe the work being done on the ladders and one uses a pair of binoculars to look off in the same direction as the men on the ladders.  Though these sketches may be small, they have a strong attention to detail and the creases in the soldiers’ clothes are meticulously drawn. 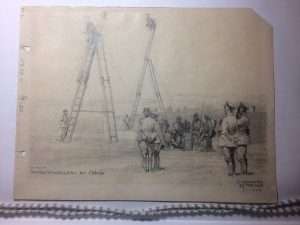 To see the Richard Assmann Pencil Sketches or any of our other collections come see us during our operating hours (Monday – Friday 8:00 am – 4:30 pm).

This entry was posted in Collections and tagged art, German, Richard Assmann, WWI. Bookmark the permalink.