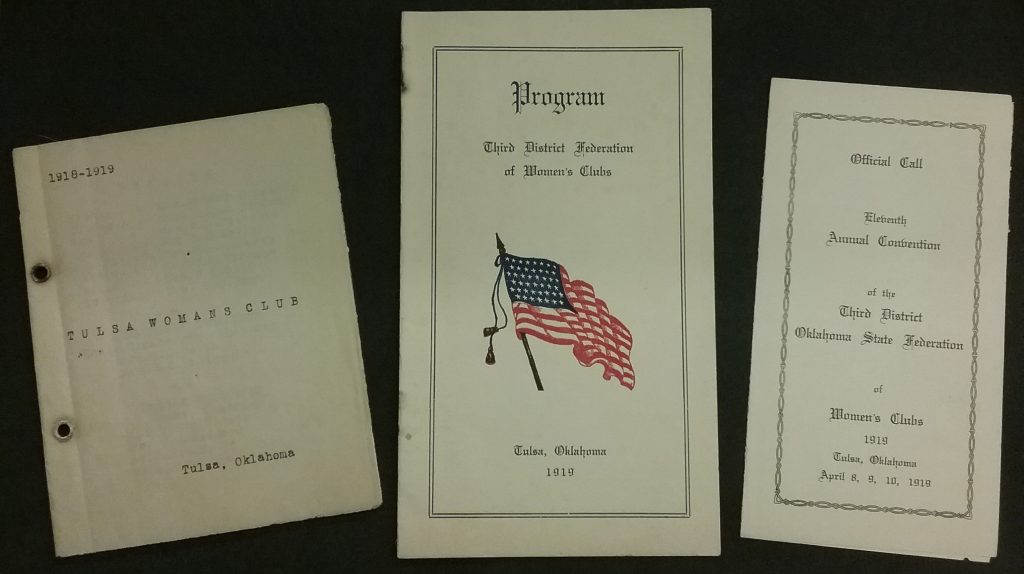 Women’s Club Movement: At the start of the end of the nineteenth and beginning of the twentieth centuries, clubs founded and patronized by women and intended for women were increasing in popularity and influence across the United States. At a time when much of the work force was closed to women, the club organizations provided a channel for their creative energy, social interaction, and community development. Many of these clubs were the driving force behind philanthropic and educational objectives.  One of these early clubs was established in Tulsa, Oklahoma.

The Tulsa Women’s Club was founded in February 5th 1906, a year before statehood. Their motto was “In essential, Unity; in nonessentials Liberty; in all things Charity.” The club color was yellow and the club flower was goldenrod. Club slogan: “the Golden Rule”. The Club was nationally federated in 1910 and joined the NFWC—the National Federation of Women’s Clubs.

The Tulsa Women’s Club endeavored, with eventual and significant success, to increase the opportunities and interest in cultural capital activities in the city of Tulsa, Oklahoma and surrounding towns. The purpose of the organization as stated in Article two of the Tulsa Women’s Club constitution was that the object of the organization “[s]hall be to consider and present the best means for securing the higher intellectual, physical, mental and moral development for all, with a view to the improvement of the civic conditions of the city, the securing of a free public library, and developing a study of art in our public schools.” 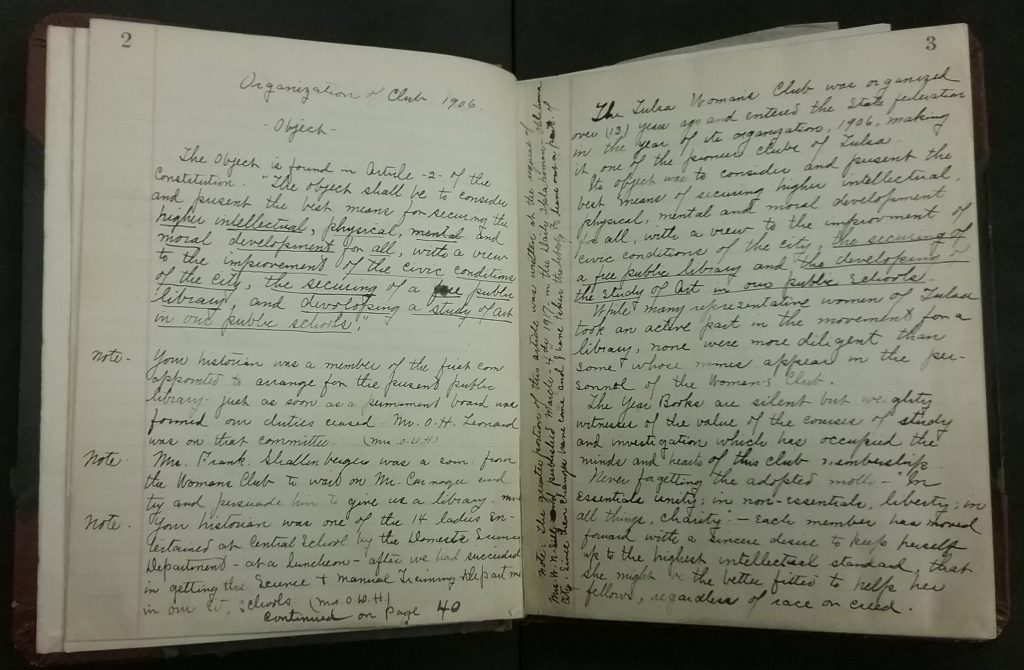 The earliest club log book in the TU collection is from 1919. Mrs. O W. Hunt was the club historian for the 1918-1919 term. This and other log books contain names of club members, tallies of dues paid and funds donated, meeting minutes, receipts, newspaper clippings, etc. In the 1919 book, Hunt endeavored to record the earlier history of the club and hoped future historians would add to her information. In 1919 Hunt writes “Living up to the ideals expressed in the constitution, no forward movements in Tulsa has failed to find representatives of the club working on committees, on serving in the ranks.”

In 1919, when writing on the progress and scope of the club’s thirteen years active work, Hunt eloquently asserts,

“Nothing which can uplift has been overlooked. Together with arts and Literature, programs have been arranged for special days, Father’s – Mother’s – Baby – Bible – Arbor and numerous others of no less importance and interest have received special attention. Much ground has been covered, the members of the club have traveled on foot; in stage coaches; automobiles; prairie schooners, Pullman Palace Cars, aeroplanes; aerial cable cars and submarines. They have conversed with noted artists – argued with statesmen and politicians, laughed with humorists and or actors; consulted doctors and dentists; interviewed editors and authors, have even invaded the schoolroom and college. Nor has Congress and the courts of our beloved land been neglected…By first class and steerage they have visited many lands, learned many things – good and bad – happy and sorrowful; they have approved and disapproved, criticized and complimented, and through it all have learned – at least in part – that “True worth is in being – not seeming – In doing each day that goes bye – some little good = not in the dreaming of great things to do bye and bye.” 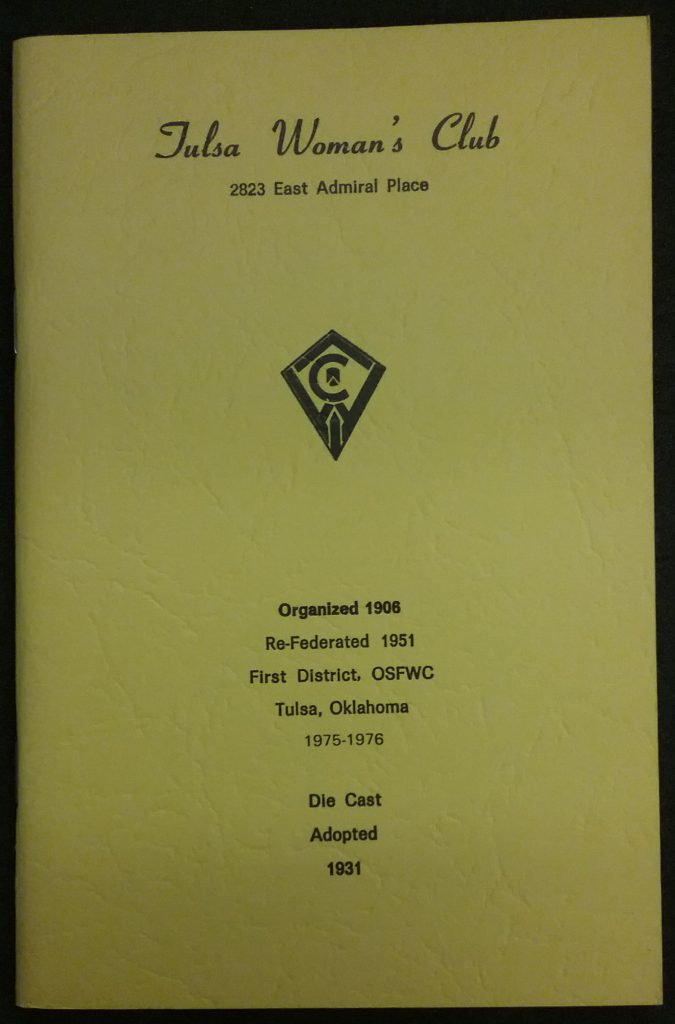 The Tulsa Women’s Club soon succeeded in creating a public library and facilitating artistic and literature appreciation by the citizens of Tulsa. Today many Tulsans are proud to support local arts and philanthropic causes. The public library has expanded and thrived over the years. Today there are over 20 branches and resource centers around the city. The city boasts of two world renowned art museums, Gilcrease and Philbrook, and over 25 other museums and galleries. Although the Tulsa Women’s Club is no longer in existence, the organization’s unending zeal and aspirations, during its 70 year tenure, has profoundly influenced the modern culture and development of the city of Tulsa.