Posted on 2018 February 16 by Emily Caselman 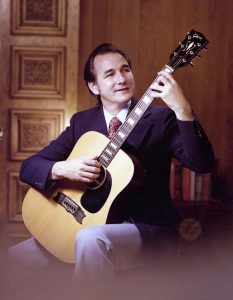 On Friday, February 5th, the person responsible for making McFarlin Special Collections what is it today, passed away at 83. Dr. Guy Logsdon was internationally recognized as an authority on Woody Guthrie, as well as Oklahoma history, and an early supporter of Tulsa’s upcoming OKPOP Museum. In 1967, Dr. Logsdon became the Director of the Libraries at the University of Tulsa, where he would remain until 1981. It was at this time that he began to enrich the Special Collections department. He was determined that if McFarlin Special Collections was going to exist, it was going to be the best archives around. He backed the creation of the Rare Books Room, which would eventually expand to what Special Collections is now, and made sure that we acquired anything that would be useful. Many of the collections and books that we house today were acquired during Dr. Logsdon’s directorship due to his perseverance and dedication to expand what was already present.

Dr. Logsdon also wrote a book titled The University of Tulsa: A History, 1882-1972, which is actually an expansion on his PhD. dissertation. This book was published in 1977 and details the history of the University. It is conveniently broken down into sections based on years and what Logsdon calls “heritage”. The book details the journey that TU took throughout this time frame, going from its Presbyterian roots, to what it was in 1872. There are also several illustrations that document everything from groundbreakings, to student parades and daily life, to Presidential portraits. Two copies of this book can be found in Special Collections if you’re interested in diving into the rich history of the University.

Dr. Logsdon was no doubt an integral part of Special Collections. His impact continues to be felt not only at the University of Tulsa, but also with those at the Woody Guthrie center, those working towards the opening of OKPOP, and so many more.