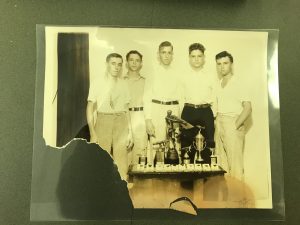 Thomas Bruce Luckett was born on December 6, 1919 in Tulsa. He attended Central High School and then went on to attend The University of Tulsa graduating in 1941 with a Bachelor of Science. He was interested in creating scale models of planes from a young age and was quite talented. He won several awards in the mid-1930s for flying model contests including the Mulvihill Trophy with a flight time of 41 minutes and 41 seconds. He placed 4th in the Moffett Trophy finals. In November of 1941 he joined the U.S. Army Air Corps. He was killed in action on August 24, 1944 when his plane was shot down in Germany. 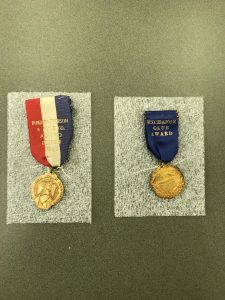 Luckett’s collection (1000.198) is small but it contains some interesting material. There are a few medals from some of his model plane competitions including the ones from the 1936 and 1937 National Model Plane Championships in Detroit. There is also a hotel card from a trip for one of his competitions. There is a hotel bill from the Book-Cladillar Hotel in Detroit for a stay from June 25, 1936 until July 2, 1936 which I assume is from his time at the National Model Plane Championship in that city. There is a certificate for Luckett from The Stix, Baer & Fuller Model Airplane Club and a letter from Tulsa World congratulating Luckett on winning the World’s model airplane contest. His high school diploma from Central High School is part of the collection. There are a few items related to Luckett’s time at TU. There is a dance card from an event and his initiation certificate from Lambda Chi Alpha. For me, my favorite item from the collection is a postcard from Luckett’s friend Alvie. The postcard ends with a note that made me laugh: “P.S. Boy! was there a Beeeeautiful Stewardess on the plane to Chicago!” which is followed by several drawings of hearts with arrows through them. While looking up some information for this post I came across a website about Alvie Dague in which Luckett is referred to as they were friends. The website has a breakdown of the events at the Mulvihill Trophy contest. 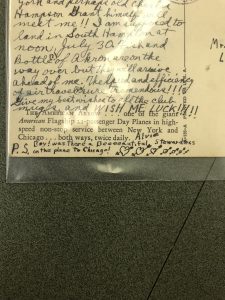 Postcard to Luckett from Alvie

To see the Thomas Bruce Luckett collection or any of our other material come by our offices on the 5th floor of McFarlin Library Monday through Friday from 8am until 4:30pm or email us at speccoll@utulsa.edu