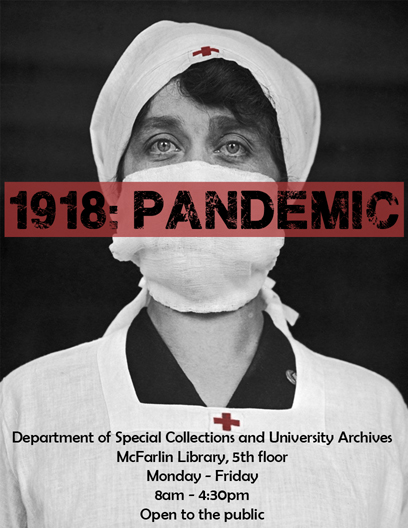 The University of Tulsa Department of Special Collections and University Archives has opened a new exhibit for the summer of 2018 titled 1918: Pandemic.

This exhibit focuses on 1918, the final year of World War I. With American troops joining the Allied forces along the Western Front, Germany sees failure and catastrophic losses that lead to the nervous breakdown of its top general, and the collapse of an empire. With global travel the new norm, an influenza pandemic breaks out, killing millions with its devastation.

Meanwhile, Russia undergoes a radical transformation, the staggering geographic changes resulting from war itself become evident, and at last, armistice and hope for a peaceful future are visible along the horizon.

The exhibit is located in Special Collections, located on the 5th floor of McFarlin Library. It is open to everyone, including the public, from 8am to 4:30pm. Friday summer hours for the TU campus are observed, which means the exhibit room will close at 11:30am.

The exhibit runs through mid-September.

Melissa Kunz is a Special Collections Librarian. She holds a Masters in Library and Information Studies and a J.D. from the University of Oklahoma, and a Bachelor of Arts in English from Hendrix College in Arkansas.
View all posts by Melissa Kunz →
This entry was posted in Exhibits, World War I and tagged 1918, armistice, influenza, pandemic, russian revolution, the great war, western front, World War I, WWI. Bookmark the permalink.