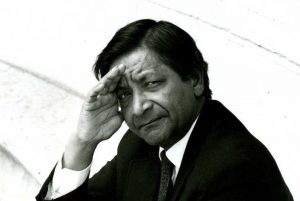 Nobel laureate Sir V. S. (Vidiadhar Surajprasad) Naipaul died in his London home on Saturday August 11, 2018 at age 85. He was known for his fiction and non-fiction novels, travel writings and essays, and autobiographic works. His most recognizable and acclaimed works include, A House for Mr. Biswas (1961), The Enigma of Arrival (1987), and In A Free State (1971). He received the Nobel Prize for Literature in 2001.

Naipaul was born on August 17, 1932 in Trinidad to Droapatie and Seepersad Naipaul. In 1950, Naipaul won a scholarship and moved to England to study at Oxford. He traveled around the world to capture the cultures of India, South America, Africa, and Islam.

The Department of Special Collections acquired the V. S. Naipaul archive in 1993 which includes manuscripts, correspondence, and memorabilia. In 2011, a second assortment of his materials were received which included 23 binders, notebooks, correspondence, and a text copy of Half a Life (2001). These materials bring visitors from around the world to experience his original and creative manuscripts.

Naipaul will be remembered for his unique perspective and controversial writings on race and Western colonization.