There is a particular fascination from modern day society with both World War I and World War II. Whether it is the old photographs, the soldier’s outfits or the patriotic propaganda posters, there is almost always something that can pique the interest of the average person.

When looking through our collections at McFarlin Library special collections, I happened to find a collection named ‘F.R. first gift of ephemera.’ This collection contains photographs and history of the 390th Bombardment group (568th, 569th, 570th and 571st squadrons) that belonged to the United States air force during the 2nd World War and the Cold War. The collection holds three main items: a page of beautiful squadron logo’s that have a vintage look with the fantastic use of color. The logos accompany a color photograph of one of the Warplanes that was used to carry out missions, as well as an air base map for their headquarters in Parham, United Kingdom.

The 390th bombardment group was a part of the 8th Air Force which was a specialized branch of the Air Force comprised of forty-one bomb groups. The group was a specialized aircraft unit that was used to combat the German military in World War II; they contributed in many vital missions that would later help to win the war. The unit was involved in missions such as D-Day and Munster where they were forced to take on over 600 German Aircraft, conditions where the bomber boys managed to beat psychological and physical demands associated with being a war pilot, potentially some of the most testing conditions a human can face. The 8th Air Force had the most fatalities out of any branch of the military at any time, with the average age in the unit being 19, it was a reality that they would probably not make it home alive.

Some exciting logo designs belong to this collection. The Svr Le Nez emblem was the emblem that represented the 390th bombardment group (center of the page), and each aircraft would carry a ‘J’ on the tail. Additional to that, each squadron had their war logos. The 568th squadron featured a black panther on a missile, the 569th squadron had a bear dropping a bomb; the 570th squadron had a joker with aces, and the 571st squadron had a dog in a military outfit holding a missile. These symbols have a very “old school” feel to them with the use of beautiful coloring and very classic design styles; this was the main drawing factor for me. 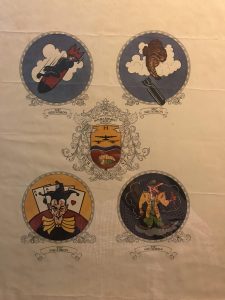 It is important to note that the 390th bombardment group was supported by a large group of ground crew that enabled these missions to take place and be successful, for every pilot there was twenty ground crew working. The collection is indeed is an incredibly small piece of history for the contributions that this bombardment group made towards winning the Second World War. 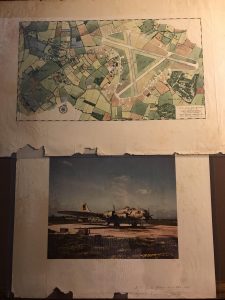 If you would like to come and check out more of our incredible collections of World War 1 and World War 2 materials you can always come to see us in Special Collections, located on the 5th floor of McFarlin Library, Monday through Friday 8:00 am until 4:30 pm.