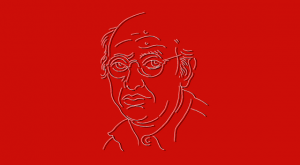 Have you ever wondered who created the famous “I love NY” logo? Graphic designer, Milton Glaser was commissioned by the State of New York in 1976 to create the iconic logo. Glaser was born in 1929 and went to the High School of Music and Art and the Cooper Union Art School in New York. He also had the opportunity to attend the Academy of Fine Arts in Bologna, Italy via a Fulbright Scholarship. While on this scholarship, he studied with the famous painter, Giorgio Morandi.

After gaining an impressive education abroad, Glaser co-founded the Pushpin Studios in 1954, founded the New York Magazine with Clay Felker in 1968, established Milton Glaser, Inc. in 1974, and teamed up with Walter Bernard to form the publication design firm WBMG in 1983. He has won numerous awards, such as the lifetime achievement award of the Copper Hewitt National Design Museum in 2004, the Fulbright Association in 2011, and was the first graphic designer to receive the National Medal of the Arts award in 2009.

Glaser worked within a wide range of the design disciplines, such as, logos, stationary, brochures, signage, annual reports, environmental and interior design, and so much more. He created 300 posters for clients in publishing, music, theater, film, institutional and civic enterprise, and commercial products and services. He created works for the World Trade Centers in New York, along with a children’s educational play park in Pennsylvania. At 89 years old, he continues to produce work in the always expanding fields of design.

Special Collections houses 14 posters designed by the brilliant Milton Glaser (2013-068). The pieces range from exhibition, birthday, anniversary, theater, and promotional posters created between 1985 and 2009.  If you are interested in viewing Glaser’s posters in person, you can always come see us in Special Collections, located on the 5th floor of McFarlin Library, Monday through Friday 8:00 am until 4:30 pm.