A Cry from the Middle Passage 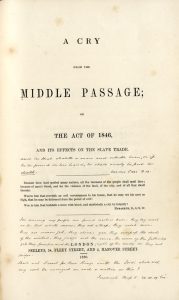 The Department of Special Collections and University Archives recently acquired a copy of A Cry from the Middle Passage; or the Act of 1846, and its Effects on the Slave Trade. London: Seeleys, 1850.

To try to explain the importance of this, a bit of historical backstory may be useful.

The United Kingdom was a bit of a late comer to the slave trade in the late 1500s, but by the 1750s they dominated the trade. The number of slaves transported from Africa in British vessels numbered between 2 and 2.5 million people.  The anti-slavery organizations began pushing harder.

Two former slaves: Ottobah Cugoano and Olaudah Equiano, spoke to large gatherings and published books.  Equiano’s An Interesting Narrative of the Life of Olaudah Equiano, or Gustavus Vassa, the African remained in publication until well after his death (The Special Collections copy is from 1813; there is the 1791 on Microfiche, and there are several electronic copies of various editions).

It wasn’t until 1833 that the Emancipation Act was passed, although that was limited.  After several revolts, everyone was technically freed in United Kingdom, territories.  Although the reality was that not everyone was freed.  In fact in India, slavery continued until the 1860s.  In Britain’s protectorates and later colonies), the final acts were passed only in 1927 in Sierra Leone and 1928 in the Gold Coast.

The slave trade still persisted.  In the UK, ships were still built and were outfitted, British bankers and insurers still financed them.  Parliament investigated endlessly, and nothing really changed

Then came the British Act of 1846, also known as the Sugar Duties of 1846. This Act equalized the import duty on free-grown and slave-grown sugar.

A Cry from the Middle Passage was a treatise on the state of the slave trade in the late 1840s and the effect on it of the British Act of 1846.  The author carefully documented how rather than slow the trade, it forced the slave traders to shift the selling of slaves in places such as Brazil and Cuba, where the slave trade had either not been abolished or abolition not enforced.

In the lyrics of the sea chantey Blow, Boys, Blow:

“A Yankee ship come down the river
Her mast and yards they shone like silver
…
What do you think she’s got for cargo?
Why, black sheep that have run the embargo”

The last slave ship to run the embargo into the American South was the Clotilda in about 1860. 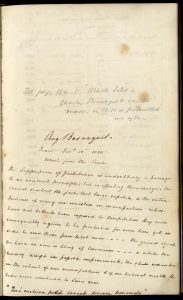 Most copies of A Cry from the Middle Passage had four front pages, 8 preliminary pages, 148 numbered pages, 4 ancillary pages.   Our new copy is dramatically different at 148 numbered pages, plus a 7-page supplement.   More importantly it has been interleaved with approximately 90 blank leaves containing extensive, densely written manuscript notes and commentary on blank leaves pasted in, doubling the size of the printed book.  These meticulously further document the argument of the author of the original, as if preparing the text for a subsequent expanded edition.  Further there are approximately 15 examples of contemporary printed material (mostly extracts from newspapers), and extra-illustrated with two folding plates that reproduce the iconic image of the deck plan of the slave ship Brooks, first engraved in 1789 and lithographed by Day & Son. 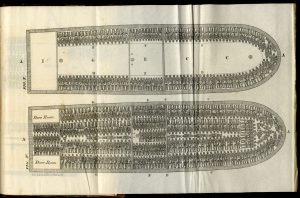 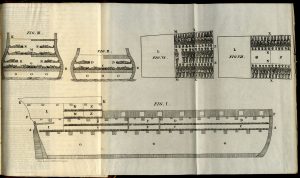 As with the author of A Cry from the Middle Passage, who assembled this altered version and then wrote the notes remains unknown.  Internal evidence suggests it could have been Augustus Henry Bosanquet (1792-1877).

This item may be viewed by any scholars or members of the public who would like to visit the department on the 5th floor of McFarlin Library, The University of Tulsa, 8-5 Monday -Friday.