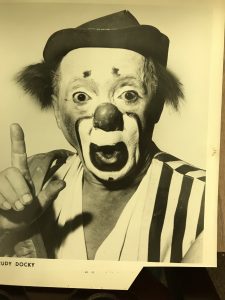 The circus was created by a gentleman named Philip Astley who was a former cavalry Sargent-Major in the British Army. Astley established the first official circus in 1782 in Paris, France where they performed the spectacle of impressive physical talents. The first versions of the circus would focus on the skills of the horse rider that would perform equestrian tricks, and this was accompanied by other skills such as gymnastics and balancing acts.
As time progressed, the circus adapted and became more popular to the public eye because of the impressive physical abilities and acts of showmanship that can be witnessed. As the circus grew, so did the acts, with the introduction of the trapeze and exotic animals it added a never seen before element of danger. In 2018 the circus is still very alive and well, although experienced in a very different manner. Companies such as Cirque du Soleil have a become a magnet for audiences all over favorite locations such as Las Vegas and New York, where they manage to sell out tickets on a nightly because of their act. Today you can find many different acts such as the trapeze, juggling, balancing acts and gymnasts, since the first circus show in 1782 the circus has become more prominent than ever expected.
Here at the University of Tulsa McFarlin library special collections, we have a circus collection that can take the viewer back in time to a previous era of circus many may never have seen before. The collection is two large boxes filled with black and white photography of the circus and all the various acts that were associated with this particular circus, quite frankly the material is unbelievable. In the collection, we have documented photographs of acts such as acrobats and jugglers, animal acts with big cats and elephants and a folder that is 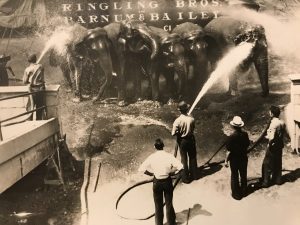 behind the scenes photography taken at the circus.
An incredibly fantastic image that is in the collection is of five elephants being washed down by men with hoses; this image puts into perspective how many animals and people were required to be moved and taken care of by the circus. There are hundreds of incredible photographs like this one in the collection, from various circus categories covering a large number of activities.

This entry was posted in Circus, Popular Culture and tagged Circus, Traveling Circus. Bookmark the permalink.