Posted on 2018 November 2 by Marc Carlson 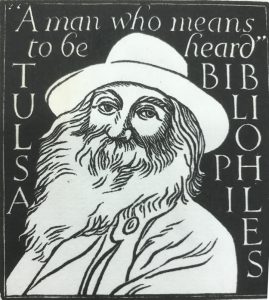 In 1952, Tulsa businessman Rush Greenslade and group called the Tulsa Bibliophiles deposited with McFarlin Library a large collection of Walt Whitman books, and ephemera, creating the first ‘rare book room’ in the library.  This was in the north wing of the basement in what had formerly been the men’s locker room.  In 1966, the Bibliophiles formally deeded that material to the University.

The rare book area moved around a bit until the actual current Jack H. and Tybie Davis Rare Book Room was established, and Special Collections began to grow.

In 1984, McFarlin obtained its first Online Public Access Catalog, LIAS (Library Information Access System).  At that time, the Library had 1,441,345 volumes, a majority of which were uncatalogued to judge from the commentary in the old student newspapers.

In Special Collections, a scheme was enacted to help alleviate that problem.  People were assigned to generate “Brief Records”, essentially author/title/publisher and which collection they were affiliated with.  One of these was the Walt Whitman library. 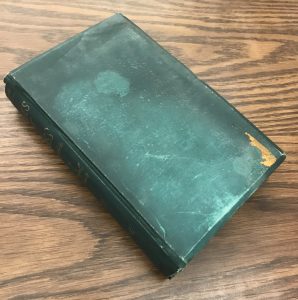 The department cataloger has been upgrading these brief records as she can find time, and she is currently working on Whitman.  This afternoon, she found this unassuming little volume, only to discover it wasn’t a book at all.  It’s a wooden box done up as a copy of Leaves of Grass.  In it are 100 different photographs of Whitman, and of artwork of Whitman.  There is also a photograph of a building, and a few advertisements depicting Whitman, and a few bits of other ephemera.

These will be added to the Walt Whitman ephemera, approximately 1854-1975 and be made available for researchers interested in Walt Whitman. 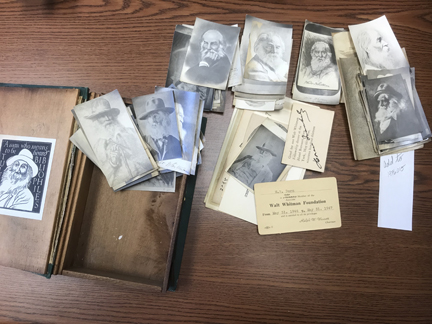