Posted on 2018 November 7 by Bobby Frame 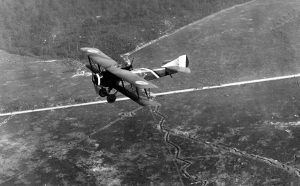 November 11th, 2018 marks the centenary of the end of World War I. The Great War was one of the deadliest conflicts in history due to new technologies and industrial developments, with a great deal of trench warfare. It is estimated that nine million combatants and seven million civilians died as a direct result of the war, this is in addition to the 50-100 million lives that were lost due to the influenza epidemic.
An important feature of World War I was the use of Aerial reconnaissance. Aerial reconnaissance is reconnaissance for a military or strategic purpose that is conducted using reconnaissance aircraft. The role can fulfill a variety of requirements, including the collection of imagery intelligence, observation of enemy maneuvers and artillery spotting. Reconnaissance aircraft – not fighters or bombers, which remained relatively rudimentary – were the focus of military aviation in the First World War. Allied powers dedicated resources to developing technical capabilities in aerial photography, photo interpretation, and aerial targeting for artillery, as well as a system for disseminating intelligence to commanders in the field. Aerial reconnaissance was arguably one of the most technologically advanced weapons that they had at the time, which was underestimated for a long time. Over time it proved its value by providing the military with imagery hat mapped out the enemy position and revealed the significant defenses that stood between them and the enemy. Aerial reconnaissance was extremely important for the use of trench warfare also, because it revealed to the military personnel the shape of the trenches and the best way to access them without being compromised. 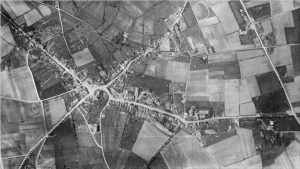 Here at McFarlin library special collections, we have a collection of World War I aerial reconnaissance photographs that contain images that were taken during the Great War. The collection contains 75 aerial photographs of the battlefield that reveals the territory that the battle is taking place in, it reveals the elevations of the ground, and it reveals the trenches that have been dug into the ground. These images are fascinating because they hold rich history from a major component of World War I, without this technology then things may never have turned out the way that they did. However, with advances in technology, the War was able to be won, ending one of the most brutal Wars in recorded history

If you would like to come and visit the WWI aerial reconnaissance photographs (1000.128.1) in person, you can come to the 5th floor of the McFarlin library to special collections. We are open from 8 am -4.30 pm, Monday to Friday. We look forward to seeing you!

This entry was posted in World War I and tagged aircraft, WW1, WWI. Bookmark the permalink.