Posted on 2019 February 6 by Bobby Frame 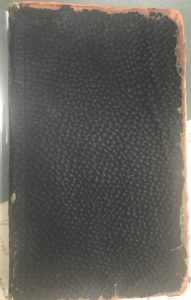 During World War I, the use of trenches was common for both sides of the fighting. The conditions in the trenches were poor, they were often dirty, wet and cold and the toilets commonly overflowed causing medical problems such as trench foot. The trenches provided a form of protection for the soldiers from their opposition and sheltered them from the middle of the battlefield known as “no man’s land.” Protection was crucial in this period of warfare because World War I was the first significant use of chemicals that had been weaponized. The primary chemical weapon that was used was mustard gas which if exposed too, almost certainly resulted in death. The trenches provided a crucial form of protection for the soldiers, if they were exposed to chemical gases, being below the ground level allowed for soldiers to grab a gas mask and shield themselves from direct contact of the weapons. 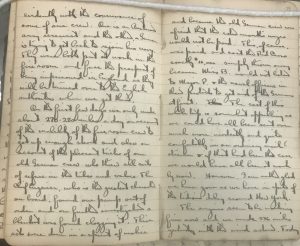 uck in the trenches. It was often the case that soldiers were only allowed to sleep in the afternoon during the daylight and for one hour at night time to protect them from surprise attacks. In their spare time, soldiers would write letters to their loved ones, kept diaries and played card games. These activities kept the soldiers in good spirits during the war. Keeping a diary was one method of soldiers being able to document their emotional and psychological feelings and experiences when it was often discouraged to share with their fellow soldiers. Diaries were a crucial way for all of those people involved in the war to have a way to share their feelings without affecting those involved in the war effort.

At the University of Tulsa Special Collections, we have the J.A.C. Colston WWI diaries. John Archibald Campbell Colston was a John Hopkins urologist who served with the AEF during WWI. These diaries share Colston’s participation as one of the medical staff working for the AEF, tracing his activities from his departure on September 15, 1914, through Tuesday, February 23 the following year. This provides a valuable first-hand look at the Great War, from the perspective of a doctor who served.

If you are interested in looking at the J.A.C. Colston WWI diaries, you can find us on the 5th floor of the University of Tulsa McFarlin Library at Special Collections. We are open Monday through Friday, from 8 am – 4.30pm.