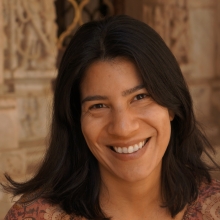 On February 21st, 2019, Fellows of McFarlin library Special Collections gathered together for the second fellow’s dinner of the year. Our special guest of the evening was Harvard professor and award-winning author, Maya Jasanoff.

The evening began with a wonderful dinner in the south reading room of the McFarlin library, bringing everyone together for spirited conversation. Dinner was followed by an excellent talk by special guest Maya Jasanoff. Providing a brief overview of her book The Dawn of Watch.

The Dawn of Watch follows the life of Konrad Korzeniowski otherwise known as Joseph Conrad, a polish sea Captain. Conrad is described as coming from troubled beginnings, left as an orphan at the age of 12 years old. Conrad’s father was a leading Polish poet, nationalist thinker, and agitator who dreamed of freeing his country from the controls of Russia. His activities resulted in his family being sentenced to exile to the edge of Siberia, and both of Conrad’s parents fell ill, losing his parents at this young age. 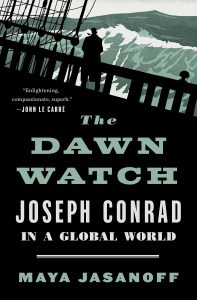 Joseph Conrad would leave his native Poland to become a ship worker in Marseille, France and ultimately landing in London, England. These experiences would lead to his celebrated novel called The Secret Agent. His experience working on ships would take him to the Congo, operating under order of King Leopold II of Belgium. In this period, the Belgians did not attempt to improve Congo; they merely exploited it for their natural resources. The exportation of a vast amount of rubber and ivory destroyed natural habitats, and local people were used for hard labor. Conrad was supposed to stay for three years in the Congo, however, he left after five long months. He left the Congo both disheartened and exhausted of his time working on the ships. These tough life experiences in the life of Conrad left a significant imprint on his life and resulted in several great novels after his time sailing.

Jasanoff also shared her experiences of traveling on a cargo ship and traveling for two weeks down the Congo River, to share the experiences that were faced by Conrad. Jasanoff’s talk was truly inspiring and extraordinarily interesting. We would like to thank Maya Jasanoff for her attendance and her brilliant talk for the Fellows of McFarlin Library Special Collections.

If you would like to visit us at McFarlin Library Special Collections, we are located on the 5th floor of the library. We are open from 8 am – 4.30pm, Monday through Friday.

This entry was posted in Fellows Events, McFarlin Library. Bookmark the permalink.