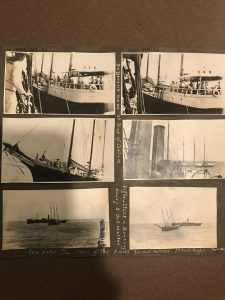 During World War I, armed merchant cruisers of the British navy were used as a form of protection for the larger warships. This was the case for the navy vessel H.M.S. Digby which served as a commercial liner but was converted into an armed merchant cruiser that carried weapons as a form of defense. However, these vessels had limited value to the navy, and many were turned into troopships, a method of transporting troops to various locations. These boats appeared to have far higher speed than most warships which were of great benefit, but these vessels had a large number of downsides to them. The navy found that armed merchant cruisers used a large amount of fuel for its work and made the ships quite costly to use. Additionally, the ships were vulnerable to enemy fire because they lacked armor and onboard weaponry, instead, they used handheld guns as protection. H.M.S Digby was used by the Royal Navy from November 22nd, 1914 and was decommissioned 6th January 1919, however, this ship was renamed the H.M.S. Artois in November of 1915.

Here at the University of Tulsa, McFarlin library special collections, we have the H.M.S. Digby – WWI ear photographs (2009-007). This is a collection of photographs that are dated from Christmas 1914 – November 1915. The collection of photographs chronicling the voyages of the Armed Merchant Cruiser H.M.S. Digby while on loan to the British Navy during World War I. It is more a travelogue than a war journal, the photographs document how the ship sailed from the North Sea to Greece, through the Suez Canal, to Singapore and Hong Kong, British Columbia, down the California and Mexican coasts, Nicaragua and Costa Rica. Most of the photos show stunning views from the deck of the ship looking out towards sea, of the Digby and her crew and officers onboard and off – Christmas Day band, cricket in Hong Kong, swimming on the beach in Nicaragua, other ships, shore, the ship dog and the office cat, or views of the various towns, villages & their occupants that were visited.

If you are interested in looking at the H.M.S. Digby – WWI era photographs collection (2009-007), you can visit us on the 5th floor of the McFarlin Library at special collections. We are open Monday through Friday, from 8am-4.30pm, we hope to see you soon

This entry was posted in Collections, History, World War I and tagged WW1, WWI. Bookmark the permalink.