Posted on 2019 September 9 by Kelsey Hildebrand

As a new Graduate Assistant at the Special Collections department, locating a single subject for a blog post was a very daunting task. This department houses hundreds of thousands of interesting pictures, books, manuscripts… How do I choose what to write about?

While poking through the Tulsa Art-Deco collection, I came across a picture of a familiar Tulsa building. As a native Tulsan, I grew up attending plays and musicals at a building on Riverside called The Spotlight Theater. With a square stucco exterior and tiny funky rectangular windows framing a large, circular window overlooking the river, this little building is hard to miss. It was built in 1928 by famous architect Bruce Goff and is also known as Riverside Studio. 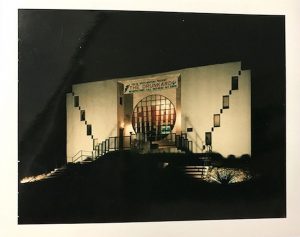 Picture of the Spotlight Theater taken from the Tulsa Art Deco collection.

In addition to the theater, Goff designed a number of recognizable buildings in Tulsa. They include one of the most recognizable Art Deco buildings in Tulsa, the Boston Avenue Methodist Church. As someone who has been exposed to both buildings her whole life, I had no idea that they were designed by the same person until I began doing this research. Fortunately, we have an extensive Tulsa Art Deco collection here in Special Collections. It contains pictures of the interiors and exteriors of various Tulsa buildings, background materials, interviews, and even some blueprints. This medium sized collection consists of almost 30 boxes and is the result of the research done by the Junior League of Tulsa to create the book Tulsa Art Deco. 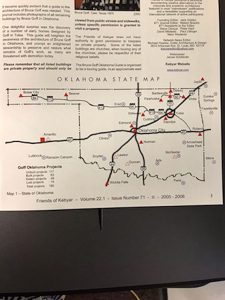 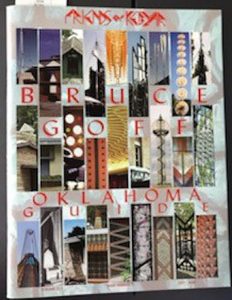 We also have a funky Bruce Goff Oklahoma Guide printed in the 1970’s. Inside the guide, there is a map of the state with symbols marking the instances of his architecture peppered all over it. There are also color photographs and detailed descriptions of every remaining piece of his architecture in Oklahoma, including a page on Riverside Studio. An architecture aficionado could use this guide to take a thrilling road trip throughout the state while laying eyes on the original buildings designed by Goff. If you were to drop by our office and flip through it, you would see that the theater is a very subdued example of his architecture.

In 1952, Tulsa’s Spotlight Club, a local acting club, began using the theater for rehearsals and performances. At the time, it was still somebody’s home. In an attempt to raise money they began performing The Drunkard & Olio, a melodrama and variety show, on November 14, 1953. The Drunkard is an adaptation of William W. Pratt’s play “Ten Nights in a Barroom”, a play intended to showcase the horrors of alcohol consumption. It was a fast hit, and the theater was then sold to the Spotlight Club and has been their permanent space ever since. Since then, The Drunkard & Olio has been performed almost every Saturday night for 66 years, making it the longest running play in America. You could still go see the show today and take part in this Tulsa tradition!

This program dated April 6th, 1973 from our Oklahoma collection includes a cast list as well as song lyrics for folk songs. They include songs in the programs because they encourage audience members to sing along. 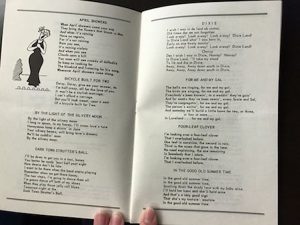 The inside of an old program for The Drunkard, showing a long list of sing along song lyrics.

If you would like to learn more about Tulsa’s history, we have more on the Spotlight Theater, art deco architecture, and so much more in the Special Collections Department. Feel free to stop by anytime and have a look. We are located on the fifth floor of the McFarlin Library and are open from 8:00 am to 4:30 pm Monday through Friday.

Kelsey is GA in the Special Collections department currently pursuing a Master's in Museum Science and Management.
View all posts by Kelsey Hildebrand →
This entry was posted in Collections, History, McFarlin Library, Popular Culture. Bookmark the permalink.