Love and War introduced Lieutenant Edward Brown and his written courtship of Leila Claribel Owens. Part 1 let us peer into his mind as he poured out his love for Leila during his military service in Europe. For Part 2, we get to read her replies, and see what life was like at home.

While Edward dropped his formal greetings to Leila rather quickly, she referred to him as ‘Friend Brown’ for months after their correspondence began. Eventually, though, she did use increasingly familiar and affectionate greetings, and her later sobriquets for him include ‘my darling soldier boy,’ ‘dearest sweetheart,’ ‘my dear brave boy,’ ‘sweetheart, darling’ and ‘sweetheart, boy’ among others. 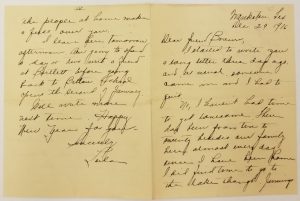 Leila’s response to Edward’s possibility of going to war is rather resigned and stoic. 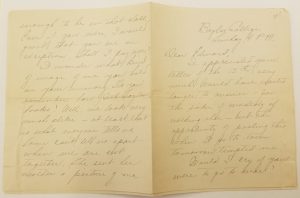 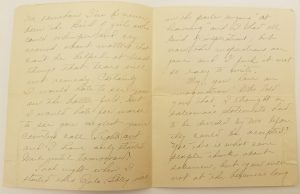 She writes that “Would I cry if you were to go to war? No, somehow I’ve never been the kind of girl who could whimper and cry around about matters that can’t be helped…I would hate to see you on the battle field but I would hate far worse to see you neglect your country’s call.” 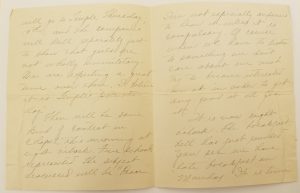 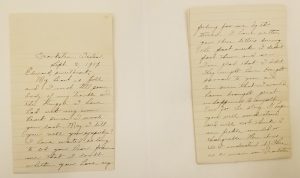 In this 12 page letter written in September 3, 1917, Leila confesses that she has spent time with another boy in her small hometown of Frankston, who has been trying to convince her to forget about Edward and focus on him instead. She mentions that she nearly gave in to the temptation. Here we have the benefit of hindsight that Edward did not have at the moment he read that letter!

By the end of that month, though, the reality of war had set in; she realized just how much she indeed missed him. The girl who didn’t normally ‘whimper and cry’ about things “had to get away from everyone and sob it out” at one point. 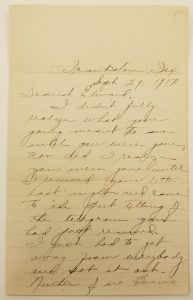 On June 29, 1918, Leila congratulated Edward on his promotion to First Lieutenant, simultaneously worried that he was no longer interested in her. She mentioned that fear a few times, but it likely coincides with the stretches to time where she did not hear from him.

Leila sent this photograph of herself in September of 1918. We have a single photograph of Edward in uniform that I was not able to get a picture of; he is handsome though, so you’ll need to come see for yourself! 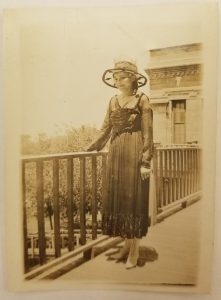 After Leila finished college at Baylor, she took a teaching job in Rock Springs, Texas, about two hours from her hometown and almost three from Edward’s native Dallas. They had been writing each other for around a year and a half and while the War was winding down, Edward was still months away from coming home.

She mentions in this letter that “it would be lots nicer to be in France than here teaching school” but that she wouldn’t know what to do with herself trying to teach grown men, since the teenage boys she was teaching “did try to carry on a flirtation with me.” 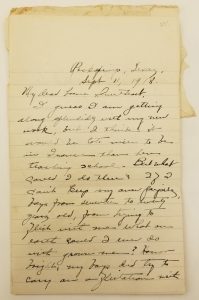 While I did not notice a formal proposal in Edward’s letters, here, Leila reminds him of the first anniversary of their engagement, looking forward to the day “when we will both say ‘I will.’ Such a great day that will be…” On November 1, 1918, they had less than a year to go until that big day! 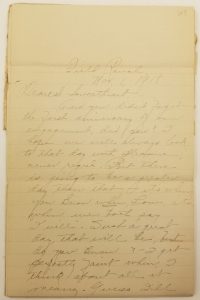 I think it is hard for us to grasp the length of time they had to wait to hear from each other. When we have dozens of methods of instantaneous communication, waiting even a single week to hear from our loved ones seems unfathomable. Leila and Edward each had to wait for weeks at a time for letters from the other. 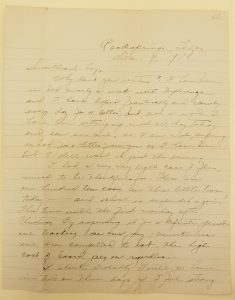 This letter was written only days before their wedding. Edward, who had been traveling across Texas and Oklahoma after he returned from Europe, had written to ask her what kind of wedding band she wanted. She responded, saying “I have never in my life seen a wedding ring that was not pretty; so I will surely be pleased with any selection you make.” I would love to see what he eventually picked out, but alas, we have no record of that in this collection. 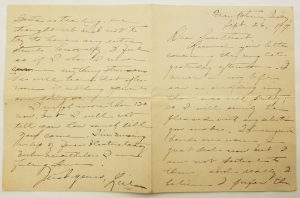 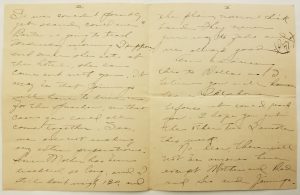 Here is the formal announcement of their wedding in the Frankston Citizen. They were married October 1, 1919, exactly one century and three weeks ago! What was their happily ever after like? What kind of career did he build after the war? How many children did they have? We don’t know, at least from this little collection. It’s fun to imagine though, and I think their letters could provide enough materials for an author to craft a beautiful love story set in World War I.

If you would like to see the Edward L. Brown Archive, or another amazing collection, come visit us on the 5th floor of McFarlin Library, anytime between 8:00-4:30, Monday through Friday.