Posted on 2019 November 1 by Kelsey Hildebrand

The Special Collections Department is home to many collections that contain personal manuscripts and letters from authors. One of our small collections is the collection of Wystan Hugh Auden’s papers, an English-American poet and playwright known for his political and social writings.

Born and raised in York, England, Auden immigrated to the United States in 1939 at 32 years old. He traveled here on a ship with Christopher Isherwood, another English author. In 1946 Auden became a naturalized citizen of the United States, living in New York and lecturing for universities. Isherwood left New York for California soon after their arrival, and they would write to one another in the subsequent years. We have some of this correspondence in our Christopher Isherwood Collection.

The bulk of this small collection are materials related to “The Ascent of F6”, a play written by Isherwood and Auden and published in 1936. We have a production copy of the script from the first production of the play in 1937. This script is complete with stage blocking and notations done by the actor Evan John, who portrayed The Abbot in the original production. There are letters and notes regarding this particular production and copy of the script written by Stuart Latham. We even have a musical score and copies of reviews for the play. 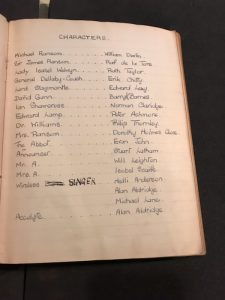 Handwritten cast list for the play “Ascent of F6” 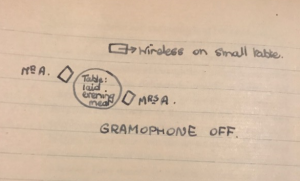 Other materials in the collection include a typescript of “September 1939”, one of Auden’s most famous poems. The poem is about the invasion of Poland by Germany, the start of World War 2, but it continues to be resurrected as it remains applicable to today’s political climate. This poem was particularly popular during the aftermath of September 11th, over sixty years after the event about which the poem is written. 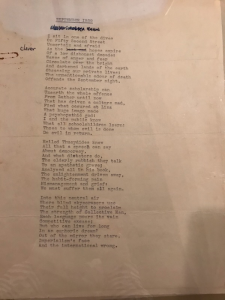 We also have typescripts for other individual Auden poems, such as “The Geography of the House”, “Love Letter”, “Since you are going to begin to-day” and “The Territory of the Heart”. There is also a typescript for Homage to Cleo, a book of poems published by Auden in 1960.

Along with the collection bearing his name, Auden also shows up in pictures and writings in the Christopher Isherwood Collection and the Cyril Vernon Connolly Papers. If English poetry and literature from the 20th century interests you, I am sure that we have a collection for you! We’re here on the fifth floor of the McFarlin Library on weekdays from 8 to 4:30.