Authorial Adventures and a Publisher’s Prowess

Posted on 2019 November 8 by Jacalyn Pearce

As Kelsey mentioned last week, McFarlin Special Collections contains a large number of letters and manuscripts from a variety of authors. These collections document both the most mundane aspects of life and the most important moments and they range in size from a handful of boxes with dozens of papers to hundreds of boxes with thousands of pages. Unsurprisingly, it takes an unimaginable amount of time to properly document and store these papers.

One of the largest collections our department cares for comes from the British publisher Andre Deutsch. He was born in Hungary, but settled in London at the beginning of World War II. For decades, his influential publishing house, Andre Deutsch Limited, published works by authors like Jack Kerouac, V.S. Naipaul (whose archive we also have, which is a post for another day), Norman Mailer, Ogden Nash, John Updike, Margaret Atwood, and Philip Roth to name a few. Deutsch, and his no less formidable editor Diana Athill, corresponded with each of these authors and with each other, which begins to explain the massive volume of this collection.

I have spent quite a bit of time this week looking at the correspondence between Deutsch, Athill and John Updike in particular. Updike is well known for his series of novels about Harry “Rabbit” Angstrom, among many others. I enjoyed reading about Updike’s vacations to Africa, the Caribbean, and England. Originally based in New England, he and his family even spent a year living in London, which generated a flurry of letters while they looked for a house and school, in addition to the ongoing writing projects. It’s extra fun to watch the dates on the letters and see how fast they communicated with each other, especially when you compare the frequency of letters with the number of typos and edits. The typewriter’s limitations allow us to see the messy part of writing, even casual letters to friends, that the computer’s advantages now allow us to hide. 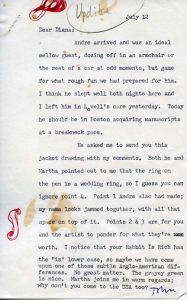 The Brits traveled to the U.S. as well 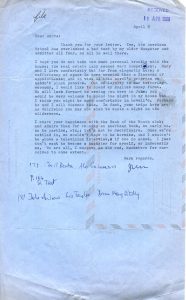 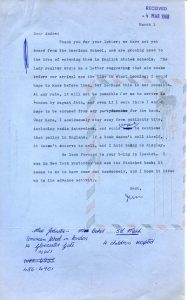 Updike mentions in the last letter that when he makes the jump across the pond, he wants to continue avoiding publicity as much as possible. I imagine that it was much easier to avoid Deutsch pressing him for public engagements when he was an ocean away.

These letters give us an insight into how much work publishing really takes. There is a nearly endless back and forth between the author, editor, and publisher to make sure that everything is as perfect as possible. These are not even a tiny fraction of the tip of the iceberg, either. This gargantuan collection is phenomenal, especially when you have a large amount of time to dedicate to getting into it.

Whether you want to see an enormous or a petite collection, stop by to see us on the 5th floor of McFarlin Library, Monday through Friday 8:00 a.m. through 4:30. We’ll be happy to see you!

This entry was posted in Collections and tagged correspondence, popular culture. Bookmark the permalink.