Prohibition in the Special Collections

Posted on 2020 January 10 by Kelsey Hildebrand

Happy New Year! As we settle into the new decade, I thought it fitting to write about Prohibition and how it is represented in our collections, as it was going on in the United States a century ago.

Many people were convinced that limiting alcoholic consumption would bring about a healthier and more morally sound society. As you can imagine, such a hot-button issue was widely discussed and published in the early 1900’s. Since people back then did not have Facebook to air their political opinions, many books were published for and against Prohibition.

In his book “National Prohibition: Its Supreme Folly” published in 1916, Rev. J. A. Homan argues that prohibition would only work if enacted in smaller units, and states that “National Prohibition, considered in all its aspects, is such an impossibility for good results that it ought not to be taken seriously”.  He and many others felt that the country was making a mistake with this legislation. 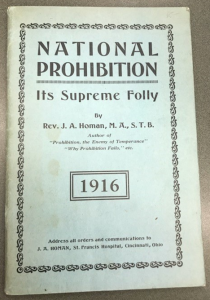 Eventually, the United States ratified the 18th Amendment in 1919. According to the amendment, the country was to go dry a year from the ratification- January of 1920, a hundred years ago this month. It lasted a mere 13 years. The 21st Amendment was passed in December of 1933, repealing the 18th Amendment and ending Prohibition.

In his book “The Price of Prohibition”, Malvern Hall Tillett published the data associated with Prohibition in 1932, one year before it was repealed. He discusses the loss of jobs, loss of federal and state revenue, cost of imprisonment, and many more. All of the claims made in the book are backed with numbers and the book originally sold for one dollar. It states on the jacket that the book “contains all of the ammunition one needs; the bare, sometimes sordid and sometimes infuriating, facts about prohibition”. Our copy is a first edition with an inscription by the author on the first page. With this book, one would surely be able to argue against prohibition until the cows came home! 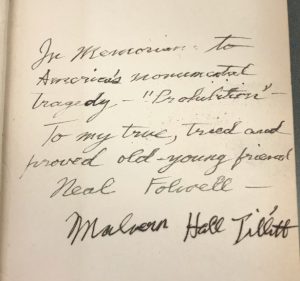 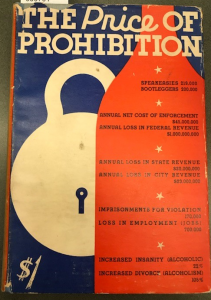 While nation-wide prohibition was short lived, each state is still able to restrict or outlaw alcohol sales without federal involvement. Oklahoma was a dry state from its inception, with laws prohibiting alcohol sales written into the State Constitution in 1907. Most Oklahomans were for prohibition at the time, including Lilah Denton Lindsey, whose collection houses this ribbon supporting prohibition in Oklahoma. Even though alcohol sales were illegal, bootleggers were prolific and most clubs and hotels still served alcohol regularly. It wasn’t until 1959 that our state officially stopped prohibiting the sale of alcohol. 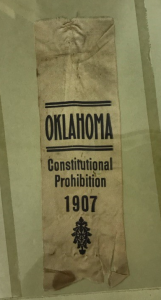 This ribbon is from the Lilah Denton Lindsey Collection, 1976-016

If you’re interested in other ways that this decade is different from the 1920’s, come to the Special Collections Department to see our many treasures from that decade. We are open M-F from 8 to 4:30.

Kelsey is GA in the Special Collections department currently pursuing a Master's in Museum Science and Management.
View all posts by Kelsey Hildebrand →
This entry was posted in Events, McFarlin Library, Popular Culture, Uncategorized and tagged Prohibition, the twenties. Bookmark the permalink.