Tulsa Through the Years

I have lived in Tulsa for just over five months now, with four of those months being focused on Special Collections, McFarlin, and TU in general. This has not left very much time to explore the city, but what I have lacked exploring in person, I have made up for in exploring historic photographs throughout our collections.

The land of modern day Tulsa was settled by the Creek Nation in the 1830s. It was originally named Tullahassee and remained small and rural for years to come. Christian missionaries were among the earliest white settlers; they built schools, like this 1875 Mission school. 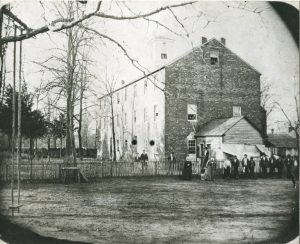 Photograph of Tullassee Mission School in 1875 with students and adults in front of the building.

Even by 1890, Tulsa showed little promise of expansion or modernization. 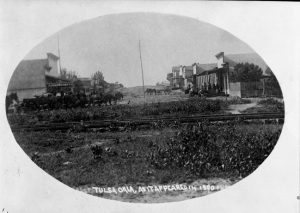 Photograph of Tulsa with a caption that reads Tulsa Okla, as it appeared in 1890.

The settlement was not officially incorporated until 1898; oil would not be discovered for more than a decade after that. However, once oil was discovered, everything changed. Attracting investors from across the country who wanted a part of the new-found wealth, Tulsa expanded dramatically by the 1920s.

Photograph that shows downtown Tulsa from Third Street and the Frisco railroad in approximately the 1920s.

Because of the wealth of oil discovered across the area, Tulsa became known as the ‘Oil Capital of the World.’ The city hosted the International Petroleum Exposition for decades; our department houses this formidable collection of correspondence and exhibition planning which is available for viewing and research.

Tulsa is not just the Oil Capital of the World though. It is home to the beautiful Philbrook Museum of Art and the Gilcrease Museum, among others. Philbrook and Gilcrease both owe their origins to the oil boom that put Tulsa on the map, but they both have had a huge impact on Tulsa’s art scene. This historic photo of the Philbrook will look awfully familiar when you visit their website https://philbrook.org/ and see what Philbrook looks like today.

Historic photograph of the Philbrook Museum villa and gardens.

Visitors travel from across the world to visit these cultural attractions and others, like the Oklahoma Aquarium and the Tulsa Zoo. Tulsa even shares ‘sister-city’ status with half a dozen municipalities in Mexico, Germany, Taiwan, Israel, Romania, Japan, and Russia. Sister city status allows Tulsans to explore other cities that are similar to Tulsa, while sharing the best of what we have to offer with people across the world. 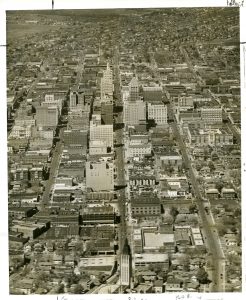 Here we can see just how much Tulsa has developed from its humble beginnings. I love the fact that the city was laid out on a grid, which is visible in this aerial photo. The grid makes learning directions so much easier when you only need to find the major streets; it also helps keep traffic moving. Tulsa offers big city attractions in a small town atmosphere.

McFarlin Library is also a fun building to track changes through the years. The iconic tower is instantly recognizable regardless of the year. While the building has changed dramatically, it remains perpetually familiar. 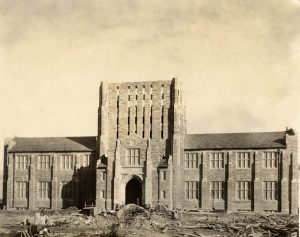 Historic photograph of McFarlin Library with dirt and construction materials in front of the building. 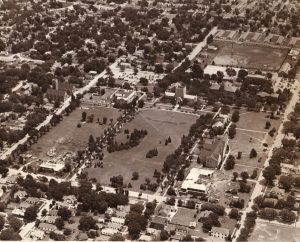 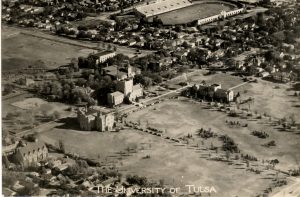 In these aerial photographs, you can see where the campus will eventually develop in all that open space. Although it’s still a relatively small, private school, TU has grown tremendously, while always granting students a quality education. My five months in Tulsa, studying at the University and working in Special Collections have been fantastic and I look forward to many more months exploring and learning even more about Tulsa’s history.

If you would like to explore Tulsa’s history by looking through the collections mentioned here, or any of the many others we hold, stop by to visit us on the 5th floor of McFarlin Library, any time between 8:00 and 4:30 every Monday through Friday.