Movies And Books Set In Tulsa And Oklahoma

Neither Oklahoma nor Tulsa are considered very Hollywood-esque, but still there have been a few movies and books that have taken place here over the years. Special Collections holds a number of different collections of interest that I thought might be fun to feature. The Motion Picture archive contains manuscript and memorabilia of a wide variety of films, some of which were set in or even filmed on location in Tulsa or Oklahoma. We also hold the K.D. Wentworth archive, which consists of Wentworth’s published books as well as a variety of papers and related materials.

Special Collections has recently acquired this movie poster for The Bull-Dogger. This 1922 silent film was shot on location in Boley, Oklahoma, which is a small, historically African-American town in between Tulsa and Oklahoma City. Norman Studios, of Jacksonville, Florida, produced this five reel movie starring African American actors to cater to actors and audiences who were denied work and entertainment during the Jim Crow era.  The film itself has not survived, and advertisements like this one are incredibly rare. 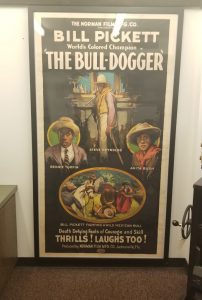 Movie poster for The Bull-Dogger 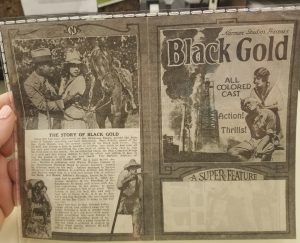 Susan Hayward and Robert Preston starred in the 1949 movie Tulsa, which revolves around the discovery of oil (if you can imagine) and the fight for oil, land, wealth, and power. Hayward’s character, Cherokee, drills for oil on her father’s land after he dies at a competitor’s well. She eventually teams with Preston’s character Brad Brady, who is a geologist trying to preserve the oil fields and their surrounding grasslands. Tulsa was made relatively early in Hayward’s and Preston’s careers. Hayward went on to film widely known movies like Rawhide and I’ll Cry Tomorrow, for which she was nominated for an Academy Award for Best Actress. Preston is best known for his role as Harold Hill in 1962’s The Music Man, though he also starred in Island of Love and How the West Was Won. 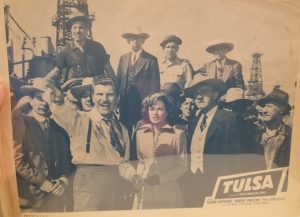 Still photograph of a scene from the movie Tulsa

S.E. Hinton attended Will Rogers High School here in Tulsa and wrote the book about her experiences there; in fact, she published The Outsiders while she was still in school. When Francis Ford Coppola directed the movie, which was filmed on location in the early 1980s, Hinton played a cameo role. 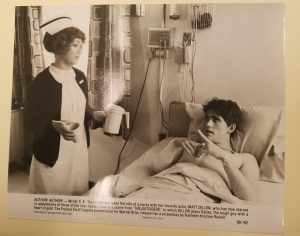 Photograph of S.E. Hinton in her cameo role in the movie The Outsiders

Hinton stayed in Tulsa, and even attended the University of Tulsa for a time. She wrote four more novels for young adults and a few children’s books, but The Outsiders has always been her most successful publication. A few of her other books were also adapted for the big screen by Coppola.

Author K.D. Wentworth was a Tulsa native who attended The University of Tulsa before her science fiction career took off. Three of her short stories were finalists for the prestigious Nebula award and she was even the secretary of the group Science Fiction and Fantasy Writers of America. Special Collections has a number of her books, including The Imperium Game, Moonspeaker, The House of Moons, Stars Over Stars, Black on Black, and This Fair Land: A Novel. All told, Wentworth authored or edited more than fifty books over two decades.

It’s also fun to see subsequent editions of the same book. Here are two of Wentworth’s book each with two editions. 1994’s The Imperium Game was her first novel after winning the “Writers of the Future” Contest. 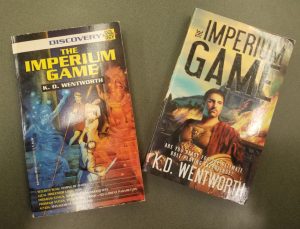 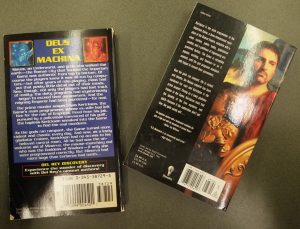 It clearly established her authorial expertise as you can see on Moonspeaker’s original cover. Wentworth edited and re-relased each novel a decade later at the height of her career. 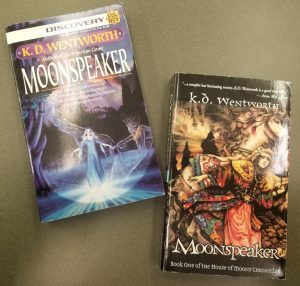 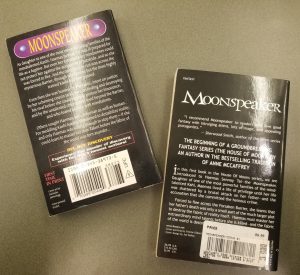 Back covers of two editions of K.D. Wentworth’s book Moonspeaker

Special Collections acquired her archive in 2008, only a few years before her premature 2012 death. Unsurprisingly, it is rather large but unfortunately not yet processed at this time. It is available to look at with the permission of Marc Carlson, Head of Special Collections.

If you would like to see these or any of the other fantastic collections we hold, stop by to see us on the 5th floor of McFarlin Library, any time Monday through Friday between 8:00-4:30 and we will be happy to share our treasures with you.