WWI is an incredibly complex, often troubling subject to study. The intricate network of allies and enemies can be hard to keep track of but there is no mistaking its devastating and long lasting effects. Special Collections contains more than a hundred different collections relating to the war, many of which consist of correspondence, but also photographs, maps, slides, posters and other ephemera.

Today, I want to feature one photo album in particular. We don’t know who created the album, but a few individual people and units have been identified from the captions. Whoever took these photos may have been an officer in the Royal Irish Regiment of the First Battalion. Regardless of who created it, we are lucky to have the photographs.

Salonika is the anglicized form of Thessaloniki, which was an important port from which men, weapons, and supplies to the front lines. 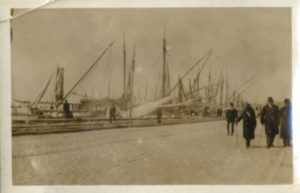 The Salonika Front was also called the Macedonian Front because it refers to the area near the Greek border with Macedonia and Bulgaria, north of Thessaloniki.  This area was a microcosm of the wider war fought between the Central Powers of Austria-Hungary, Germany, and the Ottoman Empire and the Allied Powers of Serbia, France, England, Italy, and Russia. Greece was officially neutral, although in reality there was a bitter division between the two sides.

Between the battles, daily life was difficult for the soldiers on both sides. The photos of this album capture a glimpse of what they lived through. 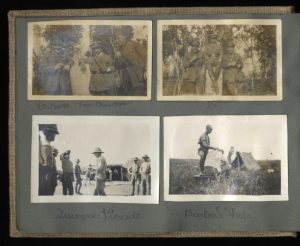 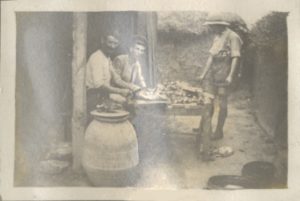 From haircuts to food, they carried on as best they could with what they had, though it was unpleasant at best. Although there were sporadic battles, the front was relatively stable until the eventual Allied victory. 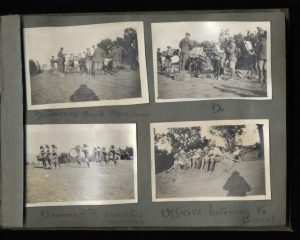 This page shows four images of a divisional band playing outside. The drummers are from the “R. Munsters Macedonia.” I love seeing the shadow of the photographer in two of the images; this is as close as we get to the mysterious photographer! 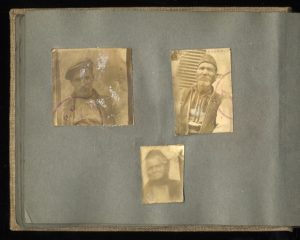 There is even a page of three individual photographs with no captions of any kind. How I wish we knew who they were and why they were included in this photo album!

Although we are currently closed to the public, if you have any questions or you would like copies of our materials, please leave a comment here, email us at speccoll@utulsa.edu, or leave a voicemail at (918) 631-2496 and we will be in touch with you!

This entry was posted in History, scrapbook, Uncategorized, World War I and tagged Greece, photographs, Salonika, scrapbooks, World War I, World War One. Bookmark the permalink.