Posted on 2020 November 7 by Jacalyn Pearce 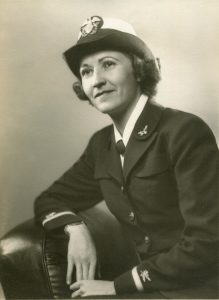 I have spent the last few months combing through our digital files to ensure their organization and uniformity when I work from home. This has given me the chance to look in depth at the scanned images of each and every collection we have. A few weeks ago, I discovered a small collection about a woman named Aimee Whitman Marrs, whose siblings donated her papers and photos in the early 1980s, some years after her death. You are probably wondering who she is and why a small collection of papers would be interesting, so read on to find out!

Born in Catoosa in 1911, Aimee graduated from Northeastern State University with a degree in mathematics in 1931. She enlisted in the Naval Reserves in 1943 and worked in Supplies; women in the reserves became known as W.A.V.E.S., or Women Accepted for Volunteer Emergency Service. At the end of World War II, she was placed on inactive duty, which allowed her to study at TU and earn a Master’s Degree in Psychology in 1948. She then taught general and applied psychology classes here, as well as practicing psychology at the Tulsa Child Guidance Clinic.

At the outbreak of the Korean War, she went back to active duty. This letter was written by H.W. Gowans, the Dean of TU’s Downtown Division, where she taught. 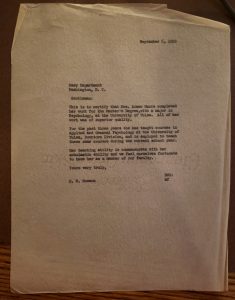 “Her teaching ability is commensurate with her scholastic ability”

She left Tulsa for the San Diego Naval Hospital when she was nominated for duty as a clinical psychologist. This job is her claim to fame as the Navy’s first woman psychologist! 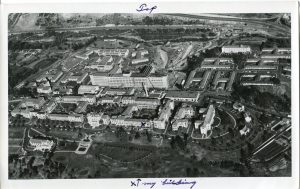 I am especially interested in this photo, because my grandfather trained as a medic at this very hospital before being sent to the Philippines; my uncle was born here years later when my grandparents were stationed in San Diego again. Aimee Whitman Marrs was here in between the times my grandfather was, but even if their service dates had overlapped, it seems unlikely that they ever would have met. It’s definitely fun to imagine who else might have been there with them, though. 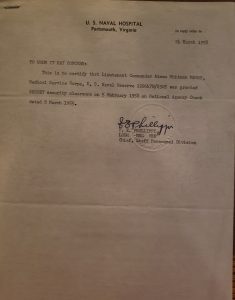 By early 1958, Lt. Commander Marrs had been granted Secret security clearance. She was clearly talented and dedicated to her work. We have a folder of her publications that has not been digitized yet, but I found this short 1949 publication about alcoholism and sobriety; it’s interesting to think that it was once cutting edge research, as I wonder if anyone will stumble across my own research seventy years from now. 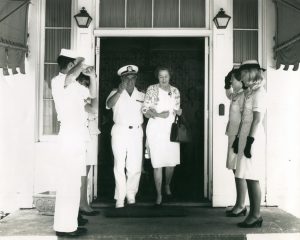 She spent the rest of her naval career in San Diego, and retired in 1969, at the rank of Commander. She helped pave the way for women in the Navy to enter areas once open only to men. After her retirement she and her husband, Manton Lee Marrs, (who eventually became editor of the Tulsa World newspaper) returned to settle in Tulsa. She died a few years later, in 1974. Her small collection fills only one box, but there are dozens more papers and newspaper clippings that I could have shared here. These two clippings below came from different points in her life but I think they give you a good glimpse of Aimee Whitman Marrs. I am so glad to have run across this little gem and I wonder what other gems await discovery in our collections! 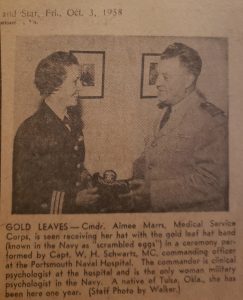 “…the only woman military psychologist in the Navy.” 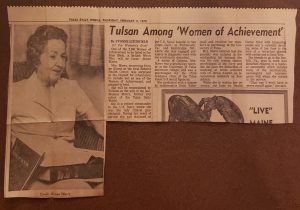 If you would like to see the collection of Aimee Whitman Marrs or any of the many other collections we hold, please contact us at speccoll@utulsa.edu for arrangements. We are currently open only to TU students, faculty, and staff by appointments made at least 24 hours in advance. You are also welcome to browse our Catalog and Digital Collections and request photocopies or digital scans of materials through the same email. Kelsey and I fulfill requests as quickly as possible, but especially large requests or a high volume of requests may take up to 4-6 weeks. We are happy to help you as best we can and we hope that you stay safe and healthy!