A few days ago we witnessed the inauguration of Joe Biden as the 46th President of the United States, so I looked through our collections to see what kind of presidential material we have. I love basically all kinds of history, but the history of American presidents is one of my favorites. At 10 years old, I memorized them in order (at that time it was George Washington to Bill Clinton) and my favorite memory of 7th grade Quiz Bowl was winning the lightning challenge by single-handedly identifying the president by his vice president.

I wish we had even more material than we do, but I still came up with quite a few things to show you today. It will be fun to see what we might acquire in the future about even more recent presidents! 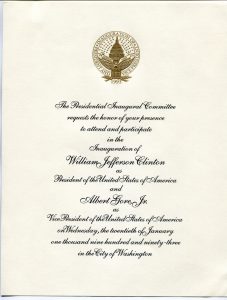 The most recent item we have is an invitation to the inauguration of Bill Clinton in 1993, 28 years to the day before President Biden. Back in the 90s, a socially distanced, live-streamed inauguration with no crowds, parades and other festivities would have been completely unfathomable.

Next, we travel back in time another 44 years to the day for the inauguration of Harry S. Truman. 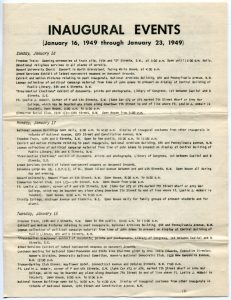 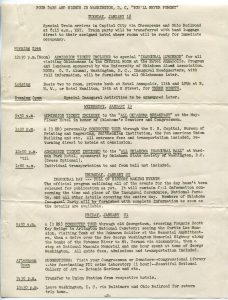 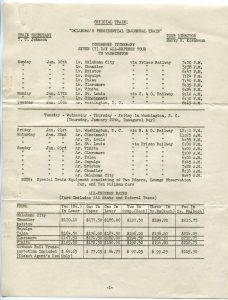 We have quite a bit of material from Truman’s inauguration in the Fred Graves collection. The Rainbow Travel Service chartered an entire ‘Oklahoma Presidential Inaugural Train’ that traveled from Oklahoma City to Washington D.C., providing accommodations and a full itinerary. Mr. Graves boarded the train in Tulsa for the low, low price of $169.50 (or roughly $1855 in 2021). 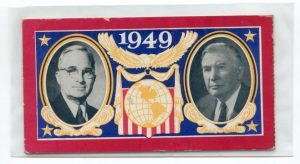 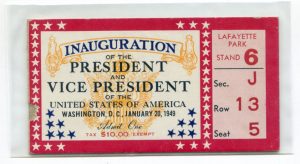 This ticket isn’t as catchy as the infamous Dewey Defeats Truman photograph, but it’s still pretty cool to hold this little piece of history in my hands. I looked up Lafayette Park on Google Maps and it’s actually much closer to the White House than to the Capitol, so I wonder what his view was like from Stand 6. If I ever get my own T.A.R.D.I.S. I’m totally going to visit every single inauguration! Mr. Graves saved so much more than I’ve shared here; there was even an optional excursion up to New York City to take in more history-focused sightseeing tours. Seeing 1949 New York City would be just as fun now when I think about how much things have changed!

This telegram is something of a stretch since it only mentions the inauguration in passing, but it reminded me that until Franklin Roosevelt’s second term (and yes, I did have to look up specifically when it changed), Inauguration Day was actually March 4th instead of January 20. 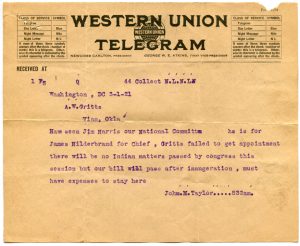 John M. Taylor was sending a telegram to A.W. Gritts to let him know that no legislation would pass until after the inauguration. Six weeks and a day shy of an even century, the inauguration referenced here was Warren G. Harding’s. The idea of waiting on a new president before passing new legislation wasn’t new then, is incredibly familiar in our own (difficult) times, and will almost certainly be around still a century for now.

The oldest item I could find regarding presidents is this extremely fragile program, so I scanned only the cover, but it looks like it would be fun to read the whole thing. I find it fitting that both the newest and oldest items we have both relate to Arkansas. 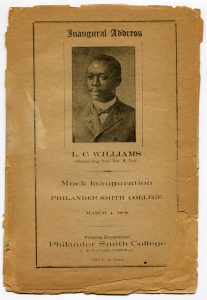 This little program was handed out at a mock inauguration of William H. Taft, which took place at Philander Smith College, a private, historically black college in Little Rock. I love that it’s a mock inauguration and that a young and slender L.C. Williams represented the middle-aged, corpulent, white president. This would easily be as exciting as seeing the inauguration itself. Where’s a good T.A.R.D.I.S. when you need it?!

If you’d like to see the these presidential items or one of the many other collections we hold, please contact us at speccoll@utulsa.edu for arrangements. We are currently open only to TU students, faculty, and staff by appointments made at least 24 hours in advance. You are also welcome to browse our Catalog and Digital Collections and request photocopies or digital scans of materials through the same email. Kelsey and I fulfill requests as quickly as possible, but especially large requests or a high volume of requests may take us up to 4-6 weeks. We are happy to help you as best we can and we hope that you stay safe and healthy!