Posted on 2021 November 9 by Abigail Dairaghi

If you ever travel to St. Charles, Missouri, you are bound to discover a wealth of knowledge about the expedition of Meriwether Lewis and William Clark, for it was the starting point of their journey. Their travels lasted from 1804 through 1806 in which they mapped out the land that had yet to be explored by Americans. It is important to remember, however, that they did not discover this land. Their expedition was helped in great part by the Native peoples who already inhabited the area.

Here in Special Collections, we house a great deal of material pertaining to Lewis and Clark’s travels. We have numerous journals from members of the expedition, including Meriwether Lewis himself, and Patrick Gass, one of the persons employed in the expedition. These journals were kept throughout their journeys are were published after their return. 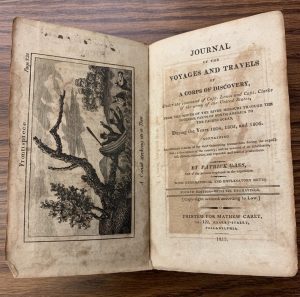 Entries include description of the country, transactions during the expedition, and interactions with inhabitants, climate, animals, etc. throughout the trip. Below includes an entry from Lewis dated September 3, 1804. 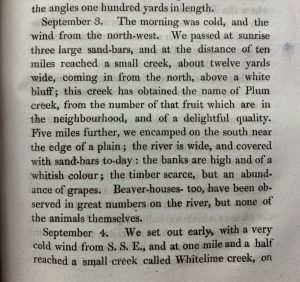 We also house a variety of published sketch maps of the expedition. These include maps sketched by Lewis, various Native tribes, and other members of the journey. Below includes a full maps of their expedition, including the trail they took to the coast, and the separate journey of Lewis and Clark back to St. Charles. 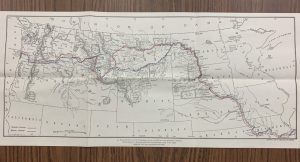 This sketch map was given to Lewis and Clark by Native Americans at Flathead River Camp, May 29-31, 1806. It shows trails and villages from the mouth of Clark’s River to the Three Forks of the Missouri. 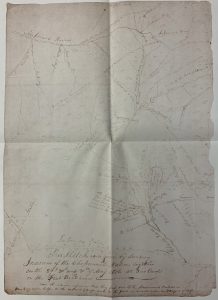 It is important to not forget the Shoshone woman Sacagawea who accompanied Lewis and Clark’s expedition from 1805 to 1806. Her  skills as an interpreter and knowledge of the landscape was invaluable to the white explorers. Though we do not house first hand accounts from Sacagawea, we do have many books written about her life and her time spent with Lewis and Clark’s expedition. 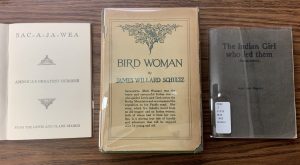 Another interesting item, though dated before the expedition itself, is a handwritten note from William Clark requesting a pint of whiskey for the Chickasaw Indians. The letter is dated May 30, 1794 from Greenville, Ohio. It is signed by William Clark, as well as John Mills, Legion’s adjutant approving the request to the adjutant quartermaster. In 1794, Clark was a Lieutenant in the 4th sub-legion of the Legion of the U.S. under “Mad Anthony” Wayne. 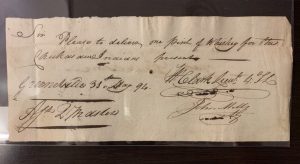